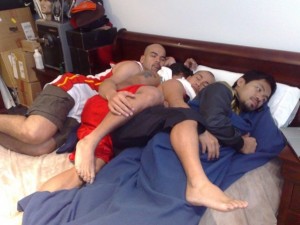 There are two sure things in the world of big-time boxing reporting– Daily mustard stains on Dan Rafael’s Triple XL blazer and the perpetual tin can rattling of the Pacquiao Press Corps.

In case you’re blind, deaf, or have a low IQ blocker installed on your internet browser, The Pacquiao Press Corps refers to that group of enterprising carpetbaggers who have turned brain-draining, click-hungry pro-Pacquiao pap into a cottage industry on the outskirts of the boxing media.

Straddling the line between legitimate fandom and strategic marketing, The Pacquiao Press Corps has turned the sport upside down, even creeping its way into the mainstream media.

Where once upon a time writers had to be paid by sites and magazines based on their respective skills, abilities, and drawing power, places like Examiner.com have taken out the middle-man in the internet writing biz and pay writers directly from reader clicks. This is neither good nor bad, but as fate would have it, the Manny Pacquiao phenomenon popped up just as Examiner.com’s experiment with untrained reporting from “citizen journalists” was getting off the ground.

The idea of “citizen journalism” sounds interesting and promising, at least in terms of exploring ideas otherwise unexplored by conventional media. Unfortunately, there’s usually not much of interest going on at the Examiner, other than the not-so-occasional rash of typos and factual errors that make the reading process a laugh riot.

But let’s get back to boxing.

Examiner.com stumbled upon a huge money-making endeavor when they first allowed boxing coverage on their site. And this is where The Pacquiao Press Corps was born.

Led by Michael Marley, who has made a career of milking bandwagons without regard to pesky details such as truth, it was soon discovered that Pacquiao, with his 90 million rabid Filipino followers and worldwide fanbase, could generate obscene numbers of clicks.

And clicks equal money…for the writer, the website, and for Pacquiao’s promotional company, Top Rank, which has benefited greatly from the constant stream of Pacquiao-friendly press.

Behind Marley, a crew of attention-starved opportunists formed, eager to get a piece of the action and willing to be conveniently “flexible” with their subject matter and editorial decisions. Guys like Dennis Guillermo, Scott Heritage, Brad Cooney, and Rick Rockwell regularly aid the mindless Pacquiao promotion in the name of penny clicks.

A casual perusal of current Examiner.com boxing columns will get you articles such as “Preview of Pacquiao’s new Nike Air Trainer 1.3 shoe and release date,” “U.S fans heckle Floyd Mayweather, demand he faces Manny Pacquiao,” and “Does God want Manny Pacquiao to win?”

Hardly cutting edge stuff and almost laughably innocuous if not for the fact that this crap has taken on a life of its own with much wider-than-appropriate exposure on the ‘net, due in part to a cozy relationship between Examiner.com and Google.

Joining forces with a fawning Filipino foreign press and a few cash and publicity-starved figures-for-sale, like Elie Seckbach, the video-making dunce who smiles while defiling the concept of ethics with “convenient” edits in favor of certain fighters and promotional companies, The Pacquiao Press Corps has become a legit force to reckon with.

So loud has been the buzz of rampant stupidity and Pacqiao-friendly “news” that even some of the mainstream boxing media has picked up on the con, with major sites like Boxingscene often resorting to the same shady reporting in an attempt to tap into the wild surge of traffic brought on by pieces that stroke the right egos and enforce the right prejudices.

Never in the history of the sport has a group of media members so conspired to run interference for one particular fighter. Perceived enemies of Pacquiao get taken down and marginalized. Media members unfriendly to “the cause” get boycotted and silenced.

To the Pacquiao Press Corps, the ultimate goal is to protect their meal ticket at all costs.

As the publicity begins to kick up for Pacquiao-Mosley, the movement will become feverishly focused as the Corps scrambles in a feeding frenzy, like rats in a Manhattan KFC. Expect the usual craziness and willingness to pander to Top Rank as the event approaches and the coins start to rattle.

It’s not about telling a story or reporting the truth or even marginally obeying some vague code of journalistic conduct. To the Pacquiao Press Corp, it’s about making money and endearing themselves to a target audience so they can make even more down the line.

Really, when you think about it, these guys are more like publicists than actual journalists. It’s just too bad that their mad dash for loose change gets in the way of real reporting and actually informed opinions.

DISCLAIMER: Because I don’t want my in box packed with enraged readers who think I’m talking about them…ALL Pacquiao fans aren’t knuckle-dragging dopes…It’s not Pacquiao’s fault that he has these dopes and professional groupies following him….and ALL writers who work on a pay per click basis aren’t guilty of pandering…People with agendas who aspire to bring down the Independent Voice of The Boxing Tribune try to bog things down in semantics…I just want to be clear that I’m talking about a very specific group of people…

You can email Paul at paulmagno@theboxingtribune.com, follow him on Twitter at www.twitter.com/boxing BTBC or check him out as he scowls pensively over a notepad at ringside. Paul is a full member of the Burger King Kid’s Club.