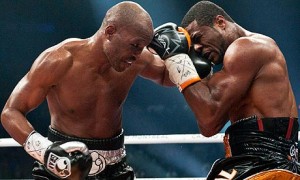 After his last battle with Ring Magazine and WBC Light heavyweight champion Jean Pascal (26-1-1, 16 KOs), Hopkins was irate.  “This was sure enough robbery. And this one hurts the sport,” Hopkins told reporters after the judges rendered the contest a draw. “One reason fighters from the States don’t like fighting outside the country is stuff like this. I know I won the fight.”

In reality, though, it probably wasn’t quite as clear as Hopkins thought it was.  Sure, Hopkins was able to control much of the fight in classic Bernard Hopkins fashion, but that was only after Pascal had dropped Hopkins to the canvas twice early in the fight.  The first four rounds were all Pascal.  The next eight saw Hopkins take control.

Since the fight, boxing fans around the world have been split over who they think really won that first encounter and what it will mean for the rematch.  Some think it was a case of Pascal simply losing his focus.  Others argue the then 45-year-old Hopkins took too long to warm up and get going.

Pascal Let Off the Gas

For the first four rounds of the last fight, Jean Pascal made Bernard Hopkins look old.  He was quick, decisive and appeared to have the edge.  He was beating Hopkins to the punch in a way that would have made his childhood hero Roy Jones, Jr. proud.

So what happened afterwards?

He got careless.  It happens all the time.  A fighter experiences early success and for whatever reason seems to lose his edge afterwards.  It’s not something a fighter can just turn on and off whenever.  It’s something cultivated through months of rigorous training and focused effort.  Once it’s gone –it’s gone and Pascal lost his edge that night after cruising through the first part of the fight.

Jean Pascal vows he will not let that happen this time.

“Bernard Hopkins said that I was a four round fighter, and this is it,” Pascal said during a recent conference call. “I’m going to knock him out inside four rounds.”

The last eight rounds were almost all Hopkins.   He stayed away from Pascal’s punches and worked his way quickly inside behind a quick jab before going to work inside.  For Bernard Hopkins, it’s all about distance, timing and subtle defensive nuances that put him into position while leaving his opponent out of it.

And that kind of thing doesn’t happen by accident.

Hopkins was never really hurt against Pascal. And after some early trouble, he was the one that started to do the hurting.  The much older Hopkins looked physically stronger as the fight wore on as he repeatedly made his opponent step backwards.  His crisp punches began to take their toll and by the time the bell rung it was clear which fighter was happy the fight was finally over (and it was not Hopkins).

Bernard Hopkins wants pick up right where he left off.  “I don’t believe he can fight backing up,” he asserts.

The best thing about boxing is you never know how things will work out.  Yes, Jean Pascal looked like he was dominating the early part of their last encounter, but did he let off the gas pedal or did Hopkins beat the fight out of him?  Sure, Hopkins seemed to figure everything out after his early problems, but was that Hopkins’ doing or simply a lack of effort from an opponent who thought he had the fight in the bag.

When the bell rings it won’t matter who did what the last fight.  And all the trash talking, the back and forth banter, the who did and didn’t say what about whom will matter even  less.

All that will be left is a fight and what it means for the fighters and the fans.  For Bernard Hopkins, it’s another chance to become the oldest person to win a world title belt and another opportunity to exhibit what’s made him a sure-fire hall of famer.  For Jean Pascal, it’s a chance to defeat a truly legendary fighter and further his blossoming career into something he hopes to be equally as great.

And for fans, this Saturday’s rematch between Bernard Hopkins and Jean Pascal is a chance to find out what they think they know.