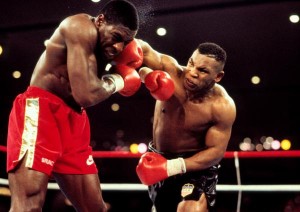 Mike Tyson will be inducted into the International Hall of Fame and Museum in Canastota, New York on June 12, 2011.

In 1986, Mike Tyson (50-6, 44 Kos) became the youngest heavyweight champion ever at age 21 when he obliterated WBC titleholder Trevor Berbick. By the end of the following year, Tyson had unified the remaining heavyweight titles to become the division’s undisputed champion.

In 1988, the undefeated Tyson met the fighter many fans still considered the true lineal champion, the equally undefeated and sensational light heavyweight Michael Spinks who had defeated Larry Holmes twice to win the heavyweight title only to be stripped for not fighting his mandatory defenses.

Tyson knocked Spinks out in the first round.

By 1990, Tyson was considered unstable outside of the ring but unbeatable in it. Then, in one of the most shocking upsets in boxing history, James “Buster” Douglas outfought and beat-up the fighter known around the world as “The Baddest Man on the Planet”. Things began to unravel.

In 1992, Mike Tyson was convicted of rape and sentenced to six years in prison. He served his time and was released in 1995 to a ballyhoo of fan and media attention. He quickly picked up the WBA title belt and then moved on to fight former heavyweight champion Evander Holyfield who was believed to be on his last legs. Holyfield outfought Tyson winning by 11th round TKO. In the return bout, Tyson was disqualified for biting off pieces of Holyfield’s ear in one of the most controversial moments in boxing history.

Tyson’s career waned until he got an opportunity at age 35 to fight reigning champion Lennox Lewis in 2002. Tyson was badly beaten in 8 one-sided rounds and he retired soon after.

Despite the troubled life he live outside the ring, Tyson remains the most popular heavyweight fighter of all time, behind only Muhammad Ali. In his prime, Tyson seemed unbeatable, and he remains just as relevant in today’s culture as he did when he was champion.