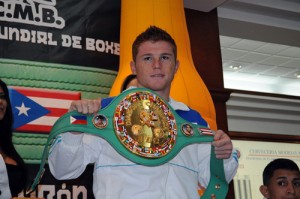 “Ripping into the core of the fight scene”

I think not. Sadly, in today’s boxing game there are many overly promoted, overrated and over-hyped young boxers who are provided an easy path to reach a high level of success without actually having faced any real valid competition. Hardcore fight fans are constantly being forced to watch these young competitors on the cable boxing networks because their promoters, in cahoots with sanctioning bodies, feel that the younger boxers with the good looks and large followings can be force fed down our throats, this happens mainly because of their manipulation of the ranking system in order to get their fighters on as the main event, win even more title belts. And all of this, in turn, means more millions in their pockets.

How did the WBC deem that Canelo was entitled to a championship title at only 20 years of age? Now, Canelo is the main event on HBO’s June 18th date against the little known Ryan Rhodes for his first title defense. In reality, Canelo Alvarez hasn’t fought any serious competition and the few formidable fighters that he did face gave Canelo a run for his money. Take the Jose Cotto fight, where Cotto rocked Alvarez and made his knees buckle with a short left hook in the middle of the first round. If it wasn’t for the ropes holding him up, Jose Cotto would have scored a knockdown, but Alvarez miraculously survived the round even with Cotto trying desperately to finish him off.

Two other tough wins for Alvarez were fights were against the 39 year old, extremely tough veteran, Lovemore N’dou, who came forward and withstood all of Alvarez’s punches and counter-punches for the entire 12 rounds. It looked as if Canelo was punching for his life, while moving backwards the whole time. Another tough and most recent March of 2011 fight was against the game 30-year old Matthew Hatton. I believe Matthew either won the fight, or it should have been called a draw. The favored Alvarez was able to walk away with both victories in those very hard fought battles.

True hardcore boxing fans and writers who really care about the future of our sport can see right through the smoke and mirrors. It’s time that we begin to question the validity of the ranking system and how boxers are ranked, while determining who the next fighter in line should be according to a true and honest system, because we are tired of being lied to. Does our opinion really count? Not sure many promoters care, as long as their pockets get fatter.

Sure, I believe many newbie boxing fans will believe the hype and follow blindly while the Andre Berto’s, Lucian Bute’s, Julio Cesar Chavez Jr’s and Canelo’s of boxing get their undeserved moment in the sun, while hardworking and more deserving fighters such as Sergio Martinez, Luis Collazo, Tim Bradley and Chad Dawson get pushed into a dark corner and get fed the scraps.

Am I being realistic in thinking that promoters, networks and sanctioning bodies will do right for the sport? I highly doubt it. Unfortunately, its a shame that the love of money is greater than their sincere love of the sport that got them up in their ivory towers where they are today.

I wish Canelo the best and hope that he can come through and meet the high and unrealistic expectations when eventually faced with stiffer competition. After all, boxing is a dangerous sport and I have respect for any man willing to step into the square ring. I also have a tendency to root for the underdog, but it’s not easy when he’s wearing a championship belt.