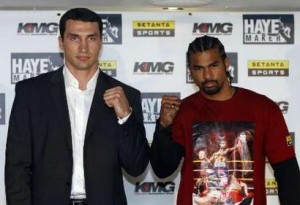 The BIG one and three entertaining “little” ones. Here’s a look at this week’s noteworthy fights:

Lujan is taking the place of Freddy Hernandez and is probably a bigger test for welterweight prospect, Melligen. The veteran from Argentina has faced the better overall opposition with bouts against the likes of Antonio Margarito and Serhiy Dzinziruk, but has lost each time he tried to move up to the world class level. The Filipino, Melligen, is riding high on a five fight win streak, but has also yet to prove himself at an elite level. Stylistically, Lujan is awkward and crafty, with an aggressive mindset while Melligen is an efficient and very orthodox southpaw. Melligen struggles with footwork at times and can be thrown off-balance easily, but has shown a very good straight left hand that could very well be the difference in the contest.

Barros is good at just about everything, but not especially proficient at anything in particular. The Argentine likes to fight at a distance and at a controlled pace. He struggles and gets flustered when crowded or when the fight deviates from his script. Caballero, on the other hand, is an awkward, tall fighter who throws from strange angles and, despite his size advantage, likes fighting on the inside. However, Panama’s former jr. featherweight champ runs hot and cold– putting on dominant performance like against Steve Molitor and Daud Yordan or drifting through lackluster performance, like his bouts with Jason Litzau and Jeffrey Mathebula. A focused, in-shape Caballero should be too much for Barros, but it all depends on which Celestino shows up.

Marquez is a heavy-handed southpaw who has a tendency to diminish his own lefty advantage by squaring up too much when pressed. Dapudong is an offense-minded fighter who does most everything with his lead left hand– especially a pawing, range-finding jab and short, tight left hook. Both fighters have a porous defense, more so, Dapudong. Both fighters have one-punch power, with Marquez having the edge. Marquez’s first title defense of the WBA flyweight belt he took from Luis Concepcion will come down to Marquez’s ability to exploit Dapudong’s defensive weaknesses. In other words, the fight is his to win or lose.

Two words: Human Sacrifice. Paz has never fought outside of his native Uruguay, only performing marginally well against club-level opposition. This fight is for a bogus WBC international strap and merely another sanctioning fee for Jose Sulaiman while the real Pongsaklek Wonjongkam vs. Edgar Sosa flyweight title fight is being worked on. Sosa via stoppage early.

WBO/IBF heavyweight champ, Klitschko, takes on WBA champ, Haye, in the biggest heavyweight bout since Lennox Lewis-Mike Tyson. Both fighters are complete and total opposites, both inside and outside of the ring. Klitschko is calm and collected, working patiently behind a bone-rattling jab and a “no risk” defense. Haye, is fire and speed, waiting for opponent mistakes and taking advantage with the division’s best hand speed. For Haye to win, he will have to draw Klitschko out of his game and exploit those errors in judgment and technique. Klitschko, on the other hand, needs to stay calm and work his usual style. If Haye fights at a distance, like he did against the 7ft tall Nikolai Valuev, he will be at the mercy of Klitschko’s long, accurate reach. However, if all the pre-fight posturing has Klitschko angered enough to go for the kill, it will play to Haye’s benefit. Wlad is the key– a calm Klitschko stops Haye in the mid-rounds. A fired-up, reckless Klitschko will find himself a TKO victim, also in the mid-rounds.