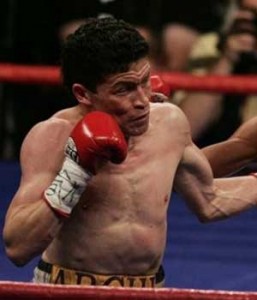 against unranked but undefeated Jether Oliva (17-0-1, 11 KOs), who is moving up from the strawweight division in order to challenge for the belt. This fight will be held in Guadalajara, Mexico on Saturday night, August 27.

This will be Solis’ first defense of his title since regaining the belt on April 30 against Luis Alberto Lazarte. Solis had held the IBF junior flyweight title from 2006-09, defending it eight times (including a draw against Omar Salado) before losing his championship status to Brian Viloria via 11th round KO on April 19, 2009. Both of Solis’ losses have been in world title fights, his other defeat coming at the hands of Nelson Dieppa in 2004 for the WBO crown at 108 pounds. In total, Solis is 9-2-2 when fighting for a championship belt.

Meanwhile, for Oliva this is his first test of his career as well as being his first fight outside of the Philippines, where he was born in General Santos City, best known as the hometown of Manny Pacquiao. The only fight in which Oliva did not have his hand raised in triumph was a third-round technical draw due to an accidental clash of heads against Noel Adelmita in 2009. The Filipino fighter is very raw, but he will have a chance to show his talents on the world stage thanks to the withdrawal due to travel difficulties of Adrian Mendoza of Argentina, who could not make the trip to Mexico for the fight.

This fight is a tune-up for Solis, who looks to continue his ascent back up the junior flyweight ladder in his second reign as IBF champion. It will be carried in Spanish in the United States on Fox Sports En Español at 10 PM Eastern/7 PM Pacific.