Say what you want about former heavyweight champion Evander Holyfield, but you can’t say that he’s a 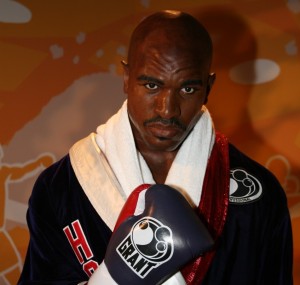 quitter.  In an age when fight fans clamor for fighters to stand their ground and fight back against long odds, Holyfield does just that and more.

And he does it against Father Time.

As Alexander Povetkin rallied his way to a razor thin victory over Ruslan Chagaev last Saturday, the camera couldn’t help but be drawn to “The Real Deal” who was sitting ringside keeping a watchful eye. Even Epix color analyst and former rival Lennox Lewis seemed surprised to see Holyfield at the fight. After all, Epix didn’t even send their announcing crew all the way over to Germany to call the fight live.

“I wonder what he’s doing there,” remarked Lewis.

Rumors immediately started swirling.  Yes, the twitterverse was buzzing with Holyfield vs Povetkin. Would that be the next WBA title fight?  Even Gilberto J. Mendoza, Vice President of the WBA, chimed in on the affair:

Translation:  It’s a done deal people.  Holyfield is getting his shot.  Sure, it’s not for THE heavyweight title but it’s one of the belts as well as an all important bargaining chip in Evander’s quest to face Wladimir Klitsckho for the legit heavyweight championship of the world.

And like it or not, Holyfied is single-minded when it comes to doing that.

“I am going to be the undisputed world heavyweight champion again,” says Evander in just about any interview he ever gives.  Honestly, I’m almost starting to believe him.

Of course for every fan out there who believes Holyfield has a right to keep on keeping on, there are ten more that argue the opposite.   He’s too old.  He’s hurting his legacy.  He’s hurting the sport.

None of it is true.

Frankly, Evander Holyfield deserves a crack at the WBA belt.  He was pratically robbed against then champion Nikolai Valuev in 2008 so a WBA title chance redux is actually long overdue.  And while Povetkin was able to eek by the proud Chagaev, he didn’t exactly look unbeatable in there.