Saturday night, Andre Berto fought an entertaining fight against a game, legitimate Top 10 fighter and looked relatively good. Sure, a between-rounds stoppage isn’t exactly the most thrilling way to end a fight, but it doesn’t really matter, does it? 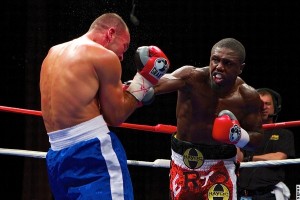 bellied blogger sycophants, I’ll take a wild guess that those who slap their computer screens and stab their parakeets in fits of Berto rage will find something dark and sinister about the fight. And even if credit is begrudgingly given, expect an 8 to 1 ratio between snarky digs and reluctant kudos.

After all, Andre Berto is everything that’s wrong with boxing! Arrrrgh!

Who ever heard of a young fighter getting signed to a lucrative deal, set up with soft touches, and promoted to the hilt? Unheard of! Arrrggh!

And the nerve of being set up to win a world title against an inferior opponent and allowed to defend it against mostly fringe fighters? Nooooo…That never happens. What an outrage! Arrrggh!

This Rant is by no means a defense of Berto, his career path, or his legacy as a two-time world title holder. It is, however, an attempt to understand why Berto gets the cyber-Cleveland Steamer while pretty much every other guilty party gets by with just a slap on the wrist.

It’s likely that his relationship with the Darth Vader of meal voucher-lovin’ members of the media, Al Haymon, rattles their cage. And, as usual, others fall in line because, well, that’s what lemmings generally do. Besides, why let the truth get in the way of snarky blog-filler, right?

Berto’s only sin seems to be that he got a good deal and had the nerve to accept the paychecks sent to him. Looking over his record, the guy has fought four legitimate Top 10 welterweights over the last three years– the same number as Manny Pacquiao and Floyd Mayweather, combined. And while Zaveck and Collazo are not exactly Cotto and Mosley, Berto isn’t exactly Pacquaio or Mayweather, either. Nobody ever said he was.

If you don’t believe that Berto has been trapped in the Catch-22 of the media, ask yourself this– Who was he supposed to fight over the course of his HBO days? Pacquiao, Mayweather, and Cotto wouldn’t consider him. The Mosley fight fell apart after the Haitian earthquake and because of Berto’s ties with those lost in the disaster. So, who else was out there? Who else would not have produced the same dismissive rage from the detractors? Other than a rematch with Luis Collazo, it’s not as though Berto skillfully maneuvered around the best and brightest challengers of his generation. Would he have received more kudos for fighting Randall Bailey and Selcuk Aydin over Juan Urango and Carlos Quintana?

Berto was simply a talented, entertaining young welterweight who benefited from HBO’s attempt to re-energize the dwindling African American fan base. The network gambled on a kid who was known for being an engaging character and a dominant young prospect. Berto never became the superstar they had hoped for and likely never will, but he has produced some memorable moments and fairly consistent TV ratings that match-up with pretty much any other fighter on the network.

And it’s not like Berto is taking up HBO slots that would go to more marketable, more entertaining American fighters. Sadly, there just aren’t that many quality American fighters around–and those who do still exist have also been routine targets for dismissal– Guys like Andre Ward, Paul Williams, Timothy Bradley, Bernard Hopkins, and Chad Dawson.

If anyone actually believes that Berto is wasting quality HBO space, I’ve got bad news — When it comes to entertaining, competent American boxing, Berto is near the top of the list of available talent. Take that statement as equal parts harsh reality and quiet resignation, but as the kids say, “it is what it is.”

Contrary to HBO’s commentary Saturday night, Andre Berto is no Ray Leonard or Meldrick Taylor, but he is a serviceable top-tier welterweight, albeit one with a boatload of technical and tactical flaws. He is not worthy of the target placed on his back.

Berto may be a symptom of all that is wrong with the sport, but he’s definitely not the cause. He’s just a guy doing his job to the best of his abilities and trying to make a living.

In other words, he’s a prime target for chubby bloggers who get aroused by calling fighters “bums” and for those who think that gang raping the latest whipping boy is a way to earn street cred as a “real” journalist.

The facts speak for themselves, though. Too bad so few people like to deal with those pesky, little details.

You won’t find him gossiping on Twitter, but if you have something to say, you can Email Paul Magno at paulmagno@theboxingtribune.com. Paul is a certified iconoclast and a full member of the Burger King Kid’s Club.