Journeyman, trial horse, opponent; all titles used to describe those guys in boxing that fight the future star.  He is the guy you put in with your hot prospect so he can get some experience.  Maybe that opponent has just enough skill to make it interesting, but not enough to threaten the precious unbeaten record.  Perhaps the opponent has a particular skill or talent such as speed, toughness, or good defense, which will give the prospect experience against this particular obstacle.

Typically the coverage and articles focus on the prospect. Rarely does the opponent (also pleasantly 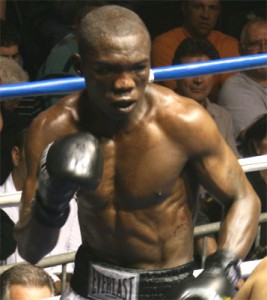 called tomato can, cannon fodder, and other less adoring terms) get the focus.  Now and then one comes along that deserves some of that precious ink.  A fighter with a career made of often being the opponent, but bringing heart and a winning attitude every time to the ring.

Such is the case with Rogers Mtagwa of Tanzania who resides and trains in Philadelphia. Despite not being a Philly native “the Tiger” Mtagwa fits right into the tough, blue collar, Philly boxing tradition.  He relocated from Tanzania to Philadelphia in 2000. Mtagwa was told he was a good fighter in Tanzania and offered the chance to come to America.  Since that time, he has taken on a host of names, losing tough bouts to Orlando Salido, Antonio Diaz, Billy Dib, Juan Manuel Lopez, and Yuriokis Gamboa.

His most notable win was a tenth round KO of Tomas Villa in 2008, but his most memorable performance was his come from behind rally against then unbeaten and WBO Super bantamweight champ, Juan Manuel Lopez (Mtagwa talked of both fights as his best moments in his career).  Trailing on the scorecards after absorbing shots from a true power puncher, Mtagwa made a late rally, hurting and nearly stopping the young Puerto Rican star.  Mtagwa had Lopez basically out on his feet in the twelfth round coming ever so close to that career defining win and championship belt.  Despite losing, it was an incredibly fan-friendly gusty performance, produced a fight of the year candidate, and won him the Briscoe award for the Philadelphia Fighter of the Year.

The performance lead to another high profile bout with his biggest career payday, taking on Lopez’s young rival Yuriokis Gamboa.  Unfortunately for Mtagwa, this time he did not have the same luck being blasted out in in two rounds where he absorbed a great deal of punishment.

In all of his fights, win or lose, he gives it his all and fights with the heart of the fictional Philadelphia fighter, Rocky Balboa.  After a nineteen month layoff following the Gamboa fight, he returned to score a TKO over Pedro Navarrete in August of this year.

Now, Mtagwa 27-14-2 (19 KO), at thirty-two years old, with a wife and three kids is getting one more shot at a title.  The opponent gets one more chance to have his Rocky moment when he meets Jhonny Gonzalez 49-7 (43 KO) this Thursday in El Paso Texas for Gonzalez’s WBC featherweight title.  His team knows that without at least a great performance, this will be his last crack at a title belt.

To accomplish his goal, he will have to pull out even more than the Lopez performance.  The Nacho Beristain trained technician, Gonzalez, is skilled and dangerous.  His seven losses are deceptive considering Gonzalez turned pro in 1999 at eighteen years of age and lost his first two pro bouts.  Gonzalez has won eight in a row all by knockout including a title winning effort fourth round TKO for the WBC belt against Hozumi Hasegawa.

Rogers in his quiet way, explained that he has been watching tapes of Gonzalez and believes he can beat him.  Mtagwa also explained he was surprised and very excited to get another title shot at this point in his career.  Manager Joe Parella was more straight forward, stating if Rogers listens to his corner he will be the winner and that Rogers has the power to stop Gonzalez.  Parella explained he has been walking around stating “and the new” all week referring to what he believes will happen on Thursday when the ring announcer calls out, “and the new, WBC featherweight champion, Rogers “the Tiger” Mtagwa.”