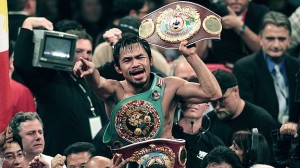 It could be argued that the combined buzz of Manny Pacquiao and Floyd Mayweather is greater than that of all United States-based fighters, combined.

Sure, fighters like Miguel Cotto and Tomasz Adamek have shown an ability to translate ethnic/nationalistic pride into full houses and better than average TV ratings, but Cotto is a weathered shadow of his former self and Adamek was just destroyed by Vitali Klitschko. Plus, neither fighter has really proven himself as a draw at the mainstream level.

Young Mexican fighters like Saul “El Canelo” Alvarez and Julio Cesar Chavez Jr. have also proven to be box office hits among Mexican and Mexican-American fans in the U.S., but both 20-something belt holders have yet to hit their stride as real, seasoned pros and, in Chavez’s case specifically, seem to be more novelty than reality.

Outside the United States, things are just peachy. Canada routinely posts sold-out arena shows with the likes of Jean Pascal and Lucian Bute. The Klitschko brothers routinely sell out soccer stadiums in Eastern Europe. In the UK, there are at least a half dozen stars capable of filling arenas and attracting big TV audiences.

But back in America, there’s Pacquiao, Mayweather and the frustrating sound of chirping crickets.