Ever wonder why boxing results are either missing from most major newspapers and/or buried at the end of the sports section, somewhere between WNBA coverage and horse racing results?

Ever wonder why you’re more likely to see highlights of high school football than world championship boxing on Sportscenter?

This should come as no surprise to hardcore boxing fans, but the rest of the sports world doesn’t take 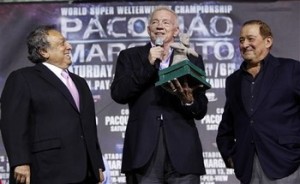 our sport seriously, doesn’t take us seriously, and snickers at the idea that boxing is even a sport anymore.

Back in ’91, I did a college internship for a talk radio station that shared studio space with a sports talk crew. The Hagler-Hearns t-shirt I occasionally wore under my obligatory 90’s grunge flannel might as well have been a Hulkmania t-shirt in the eyes of the backwards baseball-capped crew. To them, a group so anally focused on sports stats that they could rattle off career NCAA stats, there were four, maybe five boxers who even mattered. And, even so, they really weren’t worth mentioning in any serious manner. I can only imagine what these same types of sports nerds think of boxing now.

So, how did boxing go from being a mainstream, front page sport to a complete and total afterthought over the course of just one generation? Blame these fuckers:

We really shouldn’t even use the term “Promoters” when dealing with these sacks of festering rat feces. Most of the modern day boxing promoters would have a tough time keeping a job as a small-time club promoter.

I guess it all comes down to your definition of the word, but a promoter, in my dictionary, is someone who actually promotes something. Shaw, Goosen, Thompson, etc. could all be doing shows in the same mid-sized city at the same, exact time and most of the population would still have no idea boxing was in town.

After trying to finagle a deal with a premium cable network and/or casino site fee, the extent of their “promotion” involves sending out a few press releases and getting a poster printed. Oh yeah– and papering the crowd to make up for the many, many seats they couldn’t (or didn’t bother to) sell.

The better promotional outfits, Top Rank and Golden Boy, get more attention and do a better job of getting the word out, but they are so tied up with boxing politics and so worried about screwing one another that they don’t really add all that much to the sport. Most of their energies are not at all dedicated to reaching the casual fan who, literally, needs to be reminded that boxing is still going on somewhere. Because of promotional politics, big fights are routinely blocked and pushed away for lower-risk, easier paydays.

Say what you will about Dana White of the UFC, but the guy actually works to improve the image of his product– not like boxing’s promoters who are either lazy and clueless or so greedy that they will cock block the whole sport whenever it serves their purposes.

It’s laughably redundant at this point, but the WBC, WBA, WBO, and IBF are so flagrantly corrupt and selfishly stupid that I won’t even bother spending much time on this one.

With 70+ world champions in 17 weight classes and routinely rotten decisions being evenly handed out at all levels of the game, these leeches have made it even harder for new fans to follow and respect the sport.

When Roy Jones Jr. got screwed at the ’88 Seoul Olympics, it set forth a series of events that has damaged the sport to an even greater degree than the rotten hometown (or home country) decisions amateur boxing was trying to correct.

The points system implemented in amateur boxing has gradually turned the sport into something closer resembling fencing than prize fighting. With scoring generated from number of hits with the top portion of the glove rather than via strength of shots landed or ring generalship, the amateur fight game has bred a generation of pitty-pat throwing jab-flickers. And because the inside game is all but invisible to those keeping score under the new system, the fighters raised in this generation have not developed the ability to fight inside. The fighters of today are more likely to fall into a loving embrace when the action gets inside than throw damaging shots to the liver.

Without a real governing body or, even, a real set of rankings, the sport has been left to fester like a pus-filled boil on the ass of a patient at the Brookhaven Obesity Clinic.

The chaos is good for the sewer rats and dedicated douche bags who leech off the sport. But for the fans and boxing, itself? Well, the 2011 boxing scene will be sunshine and lollipops compared to what likely awaits us.

Yep, my favorite target– and with good reason.

All the stupidity and corruption runs right through the hands of the media, like a toxic, disease-filled river running right through a quickly-deconstructing industrial city.

Instead of doing something to help clean up the mess, the media has chosen to stroke their own egos, all the while feasting on the advertising revenue of those who are the biggest contributors to the sport’s decline.

The media jumps when told to jump, covers what they’re told to cover, and responds when told to respond– all in exchange for bartered access and favors or flat-out cash via ad money.

Everything fans see and hear about the sport is filtered through the media, so if there’s enough cash being passed around and a good enough publicist involved, you can be guaranteed that any angle or story worth paying for will be uniformly and dutifully distributed to the fans– whether it’s actually true or not.

Do you expect a glad-handing, free grub-grabbing egomaniac with pressed slacks and a hand out for free swag to be a hard-nosed investigative journalist? How about one who has been on more promoter payrolls than the Tecate Girls? How about the ones giving “shout-outs” to promoters, publicists, and management figures in their columns?

The more self-righteous of the bunch will post a handful of scathing indictment articles on the usual safe targets (i.e. those who refuse to give them access or choose not to purchase ad space). Take note how a sponsor’s card is never targeted for a scathing editorial about mismatches or poorly-executed promotional work.

Nobody is expecting sainthood from boxing writers, but they could at least try to hide their rat tails and pig snouts.

And, sadly, the second and third tiers of the boxing media aren’t much better. They’re learning how to do the job from the top guys and, even when starting out with a different angle and mindset, eventually get pulled into the cult and wind up just wanting to be one of the group.

Without a firm and consistent media, there can be no real reform in boxing and no return to the mainstream. And with these guys fed by the hand of those they cover, only a fool would trust what they have to say– especially when rumors and fake partisan gossip have become a major part of what goes for journalism these days.
*****************
In a sport filled with corruption and chaos, it looks as though the fans will have to be the ones to push for reform and demand change. The question, though, is whether the fans have the resolve to actually see this through.

Boxing can clean itself up, but its enemies are many and the purest part of the sport– the fans and the fighters– are completely twisted up into the game.

While the little piggies laugh it up on social media sites and smugly mock those who even hint at reform, some of us are just not buying their crap anymore. Hopefully, these scumbags will get exposed, discredited, and sent back to the used card dealerships and Ponzi scheme outfits where they belong.

You can email Paul at paulmagno@theboxingtribune.com and catch him at The Mandarin House Buffet every Sunday in Ciudad Hidalgo, Michoacan, Mexico where he ogles the waitresses and sweet talks them into getting free dinner rolls. Paul is a full member of the Burger King Kids’ Club and an ordained minister in the Universal Life Church.