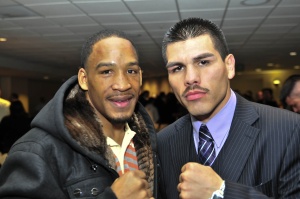 Kirkland’s return from a two-year stint in prison has been a rocky one. After a split with long-time trainer Anne Wolfe, Kirkland hooked up with trainer Kenny Adams. With less than three rounds in two fights that took place less than two weeks apart, Kirkland was knocked out in the first round by Nobuhiro Ishida in April. After two months out of action, Kirkland and Wolfe reunited and he has won his last two against Dennis Sharpe and Alex Hloros.

Angulo recently returned from a long layoff of his own. Immigration problems kept Angulo out of action from July 2010 until his return in August, when he destroyed Joseph Gomez in 1 round. Coming into Saturday’s showdown, Angulo has won five straight since his 2009 loss to Kermit Cintron, with wins coming against Joel Julio and former titlist Joachim Alcine.

The winner of the bout will likely become the mandatory challenger to WBC jr. middleweight titlist, Saul “Canelo” Alvarez.