For some fighters, knowing when to call it quits is easy. When their reflexes are gone, and they’re getting hit with punches that were either slipped or blocked two or three fights ago, they walk away. When punch resistance is gone, and the paychecks are getting smaller as the losses pile up, it’s time to walk away. But there are others, like Antwun Echols, Roy Jones Jr., and James Toney, who can’t walk away. 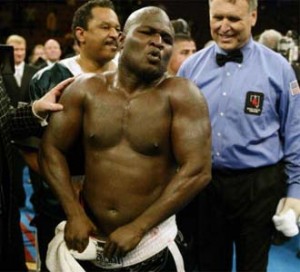 James Toney, who began his career as a slick, powerful middleweight out of Grand Rapids, Michigan in 1988, is still plying his trade 24 years later. Like Echols and Jones, signs of slowing down haven’t recently begun to appear – they’ve been around for a while. Unlike Echols and Jones, who nowadays get knocked out when their head hits their pillow too hard, Toney still finishes fights on his feet, not matter how exhausted he is at the end. In the six losses spread throughout his hall of fame career, Toney has never been knocked out.

It is easy for anyone to say it’s time for James “Lights Out” Toney (73-6-3, 44 KOs) to retire. As followers and fans of the sport we don’t like to see icons embarrass themselves and tarnish their legacies. It is the state athletic commissions who get the last word when it comes to the decision on who should fight and who should hang up the gloves. And unless someone is willing to step up and beat Toney into retirement, the only option we have is to refuse to watch.

In the case of James Toney, who as I said before has never been knocked out, he has become a fighter whose risk-reward ratio is unfavorable. Despite his age and weight problems, Toney can still make anyone out there struggle to earn their victory. He can still beat a lot of guys out there if given the chance. For many up-and-coming contenders, why fight James Toney when there are other former champions and contenders out there that will put up less of a fight, yet still help them move along to bigger fights and paychecks?

Up until recently, Toney called out and taunted former WBA heavyweight titlist David Haye. He called Wladimir and Vitali Klitschko, the “Klitschko Sisters”, in hopes of selling the idea of a fight between one of the two dominant heavyweights of this era and a guy on the wrong side of 40 and 50 pounds overweight. David Haye ignored Toney in his relentless pursuit of the large paycheck that came along with a unification bout with Wladimir Klitschko. The Klitschkos scoffed at Toney’s taunts.

Unable to lure a big name into the ring with him, Toney toiled away the last three years fighting the likes of Matthew Greer and Damon Reed. In his February fight with Reed, Toney (5’ 8”) tipped the scales at a career-high 257 pounds – 5 pounds heavier than the 6’ 8” Vitali Klitschko’s career high. In between Greer and Reed, Toney kept busy by playing Russian roulette with 6 rounds in the gun when he crossed over to MMA to challenge 5-time UFC champion, Randy Couture last summer. Toney was paid well for the 199 seconds in which he was dry-humped against the octagon cage, but his MMA experiment was short and ended in humiliation.

James Toney is no longer a serious contender. His time has passed. The Klitschko brothers saw no need for him as an opponent. Both Vitali and Wladimir aren’t in need for a big name far past his prime on their resumes. And the stable of European contenders in line ahead of Toney are happy to run through European club fighters as they await the retirements of the Klitschko brothers.

Toney has been calling for a shot, and he finally gets that shot against Denis Lebedev (22-1, 17 KOs) on Friday.

For James Toney, Denis Lebedev is an oasis in the middle of the desert. Rated number 5 by The Boxing Tribune, Lebedev lost a debatable split decision to Marco Huck in his only world title bid last December. After knocking out the hollow shell of Roy Jones in May, Lebedev is looking to add another of boxing’s top super middleweights from the nineties to his resume.

After waiting nearly three years for a fight against an opponent with more than a faint pulse, Toney is finally being given his opportunity to prove he still deserves to be in the ring with a championship contender. Looking at the slow, out of shape, lumbering klutz that plodded through his last few heavyweight fights with his trunks repeatedly falling below his bloated waist, this fight appears to be a disaster waiting to happen.

But if James Toney, apparently re-dedicated and walking around closer to the cruiserweight limit than he has in eight years, can find the slickness and power he lost at the dinner table, Lebedev will be in for a tough twelve rounds and some serious buyer’s remorse. But will the years of abusing his body respond to his sudden dedication to his fitness, or will he too be a hollowed out shell of the hard-nosed defensive wizard with a mean streak, and experience the bitterness of his first career knockout?