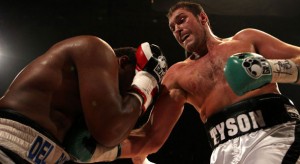 Fury is an orthodox fighter who will hold an eleven year age advantage and six inch height advantage over his opponent.  He’s ranked 11th among heavyweights in the world by The Boxing Tribune and hopes to continue his quest to become a legit world title contender.  A victory of Pajkic wouldn’t quite put him in line for a world title shot, but it would serve as another steppingstone where Fury can test his mettle against another regional belt holder.

Pajkic comes into the bout undefeated.  He is well known on the Canadian heavyweight title scene but has never faced a prospect as highly valued as Fury.

The bout is scheduled for 12 rounds, and Fury’s Commonwealth heavyweight title belt will be on the line.