— Nonito Donaire, having officially vacated his WBC and WBO bantamweight titles, is planning a move to junior 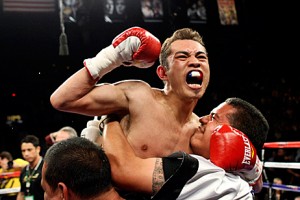 featherweight (122 lbs.) and his promoter, Top Rank, is seeking a bout with second generation Puerto Rican former world champ, Wilfredo Vazquez Jr. for the now-vacant WBO title in that division. According to WBO officials, the bout is tentatively scheduled for February of next year.

— Donaire and Vazquez will be battling for the world title formerly held by Jorge Arce, who has vacated the title in favor of a return to bantamweight (118 lbs.) and a shot at the vacant WBO title against Indonesia’s Angky Angkotta on November 26th in Mexico.

— “Nordic Nightmare,” Robert Helenius will take on Brit, Dereck Chisora for the vacant European Heavyweight title on December 3rd.  The bout will serve as chief support to the Alexander Povetkin-Cedric Boswell main event at Hartwall Arena in Helsinki, Finland.

— WBO cruiserweight champ, Marco Huck, has extended his promotional contract with Sauerland Event for two more years. Huck, who last defended his title in October against Argentina’s Rogelio Omar Rossi should next be faced with #1 challenger, Ola Afolabi. Huck beat Afolabli once before, winning a close unanimous decision in 2009.