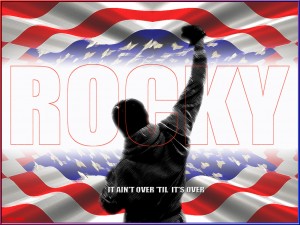 Klitschko brothers have teamed up to produce a stage version of the former’s Rocky movie franchise, set for 2012.

I say tempting because the prospect hardly fills one with a sense of joy – the films themselves (were there six in the end, or seven?) were pretty dreadful in their own right, barring the original and perhaps the final installment which, we thought, had brought the whole sorry affair mercifully to it’s conclusion.

It seems, not so. There is good news, however, in that it looks like the thing is going to take place in Hamburg, Germany – which, if there are gods of entertainment and they have any sense of decency, is where it will stay.

The Germans, of course, will lap it up. The nation is right behind every move the Klitschko’s make, even though they’re adopted Ukrainians – and are well used, in obscene numbers, to sitting through wooden, sterile, uninspiring performances featuring a lot of bluff and bluster but very little by way of substance. Rocky The Musical will suit German sensibilities perfectly.

Of course Rocky has very little to do with boxing – as Stallone said this week, cringingly: “At the end of the day, Rocky is a love story and he could never have reached the final bell without Adrian. To see this story coming to life on a musical stage makes me proud. And it would make Rocky proud.” Allow yourselves a little shudder.

Perhaps those of us who cling to what little dignity is left in our sport should just shrug our shoulders, avert our eyes and pretend it’s simply not happening – much as we do each time our senses are assaulted by yet another soporific Klitschko title “fight”.