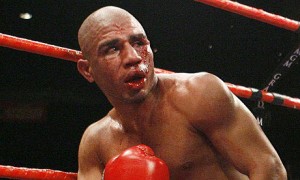 Miguel Cotto (36-2, 29 KOs) raised eyebrows in the U.S. with his cold and calculated destruction of the gatekeepers of the jr. welterweight division early in this decade. At the same time he captured the collective heart of the Puerto Rican boxing fan. After knocking out former title challenger, Justin Juuko in his tenth professional fight, it was clear that Cotto would be the successor to Felix “Tito” Trinidad, the long-time favorite son of Puerto Rico. Cotto’s aggressive style and killer instinct made him a sight to behold. When he was rocked and on shaky legs, as was the case several times early in his career, he always found a way to come back and turn his eager opponent away. What Cotto lacked in the one-punch power department, he made up for with tenacity and determination, wearing his opponents down with an unpredictable, yet highly effective attack to the head and body.

By the time Trinidad retired as a full-time boxer in 2002, Cotto was poised to make a run through a long line of fighters that helped him matriculate towards his first title shot in 2004. Cotto eventually won the vacant WBO jr. welterweight title against an overmatched Kelson Pinto, knocking him out in the sixth round. Cotto would go on to make six successful title defenses, his last being a brutal twelve-round beating of Paulie Malignaggi, before moving up to the welterweight division to seek bigger and better challenges.

It was in the welterweight division that Cotto stepped up his level of competition and showed he was more than a protected product of Top Rank Promotions’ expert matchmaking. Cotto bulldozed Carlos Quintana to win the vacant WBA belt in his welterweight debut before going on to victimize Oktay Urkal in his first title defense as a welterweight. It was not the wins over Quintana and Urkal that helped define Cotto, it was his wins over Zab Judah and Shane Mosley, both still dangerous and legitimate threats in 2007.

After a rough start against Judah that had Cotto hanging on for dear life, a couple of timely low blows landed below Judah’s cup gave Cotto the time he needed to recover and turn the tide. Cotto turned the fight around, and despite suffering deep cuts in his mouth, Cotto bounced Judah around the ring before the fight was stopped in the eleventh round.

In November of 2007, Cotto went up against Shane Mosley after we saw a brief thawing in the cold war between Golden Boy and Top Rank. Cotto boxed effectively in the early rounds to give himself a comfortable lead, and he spent the later rounds in retreat and putting his biggest flaw on display for the world to see. While Mosley came forward and brought the fight to Cotto, we saw Cotto’s inability to fight going backwards. When Cotto is coming forward and being aggressive, he sits down on his punches and they carry much more power than when he’s backpedaling and throwing arm punches at his opponent. Cotto escaped with a close unanimous decision victory over Mosley, setting up his July 2008 classic fight with Antonio Margarito.

Much has been said, speculated, and debated about over the outcome and the possibility of illegal handwraps in the first Cotto-Margarito bout. In a fight that saw Cotto use his superior speed to slow down his much slower, iron-chinned opponent, it also showed Cotto again fighting in retreat mode as the wide, arm punches of Antonio Margarito began to disfigure, bruise, and cut his face.

But despite Margarito’s superior resolve and intestinal fortitude, Cotto did not give up until the eleventh round. He stood and traded when he had to. He fought off the ropes, flurrying before trying to duck away from the non-stop onslaught of punches from a hard-charging Margarito. It was all for naught in the end, as two right uppercuts and left hooks landed flush on Cotto’s face, forcing him to take a knee. He made it to his feet only to be swarmed by another flurry of punches before taking a knee for a second time as his uncle and former trainer, Evangelista Cotto threw in the towel.

As any boxing fan can tell you, Cotto has been bruised and bloodied in fights before. Antonio Margarito was not the first man to ever leave his mark on the Puerto Rican star’s face. With blood emanating from his eyes, nose, ears, and mouth, Cotto had the look of a man considering a change in careers.

Margarito basked in the glow of his victory and became one of the hottest fighters in the sport, a title that was expected to be bestowed upon Miguel Cotto. It was not until Margarito’s next fight that the legitimacy of his victory over Cotto, and that of his entire career, was called into question. The infamous plaster knuckle pad scandal and Margarito’s blatant refusal to accept even a shred of responsibility for what he and his team called his trainer’s slip up, has made us take a second look at the post-Margarito version of Miguel Cotto.

Cotto was untested in his return bout against Michael Jennings, an easy five-round TKO victory over the untested former British welterweight regional titleholder, which earned him the vacant WBO welterweight strap. It was not until Cotto’s June 2009 split decision victory over Joshua Clottey that we saw evidence of a broken man.

Cotto and Clottey fought a grueling twelve rounds, with Clottey tasting the canvas for the first time in his career and sustaining a minor knee injury later in the fight. But on a few occasions when Cotto was caught flush with Clottey’s shots, you could see his legs stiffen momentarily before he retreated for safer grounds. Early in his career, Cotto was quick to react when hit hard, whether he returned fire of got on his bike and made like Lance Armstrong. He was now reduced to a moment with a “deer in the headlights” look before he retreated, the once great fighting spirit diminished.

The ghost of Antonio Margarito and the (possibly plaster-enhanced) beating dished out continued to haunt Miguel Cotto in his fights with Manny Pacquiao, the light-hitting Yuri Foreman, and against Nicaraguan wild-man, Ricardo Mayorga. With the exception of in his fight with the fighting congressman from the Philippines, Cotto has found a way to fight through the troubling memories from the now-infamous July 2008 night and emerge the victor.

In the wake of the handwrap scandal, sometimes dubbed “Plaster-gate”, Cotto has always maintained that he would not fight Margarito again. It is possible that he sees damaged goods in Margarito, who was knocked out two fights ago and suffered a fractured orbital bone and detached retina in his November 2010 fight with Manny Pacquiao. Miguel Cotto may see Saturday night’s rematch with Antonio Margarito, televised live on HBO Pay-Per-View, as his opportunity to get revenge and justice on the smug, unapologetic fighter from Tijuana. It is in our nature to want to right the wrongs done upon us; we see it in our daily lives, whether or not we carry out our plans of vengeance is another story entirely. In a sport of sanctioned, controlled violence, Cotto is doing what anyone would fantasize about.

Miguel Cotto has done well for himself in his post-Margarito career, having won a portion of the jr. middleweight crown from Yuri Foreman in 2010, but the wolves are hot on his heels. He has been offered up as a possible opponent for younger Top Rank stablemates, Julio Cesar Chavez Jr. and Vanes Martirosyan, a sign his promoter is looking to cash out his once-prized client.

My instinct tells me that Cotto will fail to overcome the man who stole the best years of his prime and has haunted him for the last three years. If I am wrong, and Cotto has enough left in the tank to put an end to the tainted career of Antonio Margarito, he may indeed be able to exact his revenge. What Miguel Cotto cannot regain, however, is the years he lost, the legacy he could have gone on to create, and what might have been.