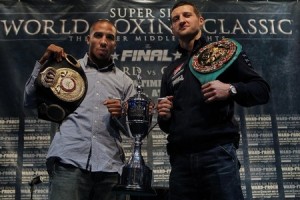 City, NJ after more than two years of fights and roadblocks.  When this whole thing started, most experts thought it would be Kessler and Abraham fighting for the title but the tournament’s two dark horses, Andre Ward and Carl Froch have emerged as the best and most resilient in the field to reach the end.

Below we break down the specifics of Saturday’s finale between American Ward and England’s Froch.  Like last week in DC with Khan vs. Peterson it will be a battle of fighters from across the pond, but this time it is the American who is favored and the Englishmen that is coming in as the underdog.

Boxing ability: I will start by saying that Ward gets the advantage due to his diverse boxing skill set.  He is the chameleon of boxing in that he can fight from a distance or fight on the inside.  He can stand in front of his opponent or he can move in any direction.  Ward mixes up his punches and is extremely unpredictable and can land effectively with either hand out of an orthodox or southpaw stance.  That being said, Froch’s skills are vastly underrated.  He has gained some respect during this tournament but is still widely considered a tough brawler.  Froch uses his height and long reach well behind a good jab.  He showed in the fights with Kessler and Abraham he is a crafty boxer along with being a tough brawler.

Power: Neither man is a one punch knockout artist but Froch is the bigger hitter.  The Englishman possesses solid power especially from his long straight right.  Ward’s power comes more from accurate punching than real solid power in his shots.

Speed: Hands down Ward will own the speed category Saturday night in every facet of the game.  His hands are quicker, his feet and movement will be faster, and his reflexes are far more agile.  Ward is built for speed and he uses his natural gifts to his advantage to play the game of hit without being hit.  Froch, despite being tough and gritty, will never be considered a fast fighter.

Stamina/Conditioning: Both men are extremely well-conditioned and take pride in coming to the ring in peak shape every time out.  Despite a long tournament where they have consistently been faced with the best opposition at 168 possible, (other than Bute) Ward and Froch have showed up for every fight in great shape without a letdown.  Ward is the better all-around athlete and has looked good late in fights.  Froch, though, seems to possess that ability to get stronger as fights go into the late rounds and has been the fighter with more left in the tank in all his Super Six bouts.  This category is even.

Defense: Andre Ward may be the best defensive boxer in the game not named Floyd Mayweather.  While he has been criticized for not putting on the most exciting fights, he sticks to a style of boxing that results in lopsided punch stats in all his bouts.  Ward uses every skill and trick you can learn in a boxing gym to avoid being hit while landing his punches.  He moves his head and body.  He has excellent footwork that puts him in an advantageous position at all times.  He can protect himself from a distance as he did with Abraham and can be dominate on the inside as he was with Allen Green.  Froch on the other hand often has little regard for defense.  He frequently drops his hands inviting his opponent’s punches while relying on a good chin to save him.

Chin: As stated above, Froch does not possess great defensive skills, therefore, he relies on his chin.  He can get away with this because his chin is made of solid rock and he clearly has the advantage in this category.  He has been hit with solid shots from some of the best punchers in the division including Jean Pascal (prior to the Super Six), Kessler, and Glen Johnson.  Yet Froch has never seemed so much as wobbled in any of the bouts.  He has only been down once, against Jermain Taylor but recovered quickly and was never in real danger after that.  Ward is a question mark.  Those who are thinking upset believe Froch can get to the American’s chin and stop him despite a difference in class and skill.  Ward was dropped twice early in his career against far lesser opposition but since then has not been touched.  He came through without a problem against big punchers like Abraham and Sakio Bika but the Cobra Froch will be his best test of whiskers, considering Froch hits hard and should have better success than the previous mentioned fighters.

Experience: Ward has the extensive amateur background and some good pro opposition but Carl Froch has faced much better opposition prior to and during the tournament.  Ward had his toughest opposition in the opening Super Six bout when he dismantled tourney favorite, Kessler.  But since then he got replacement Allen Green, an out of tournament fight Bika, and then Abraham who had been exposed as an overrated one trick pony by that point.  Froch gutted out wins against Jermain Taylor and Jean Pascal before the tournament and then, in the tournament, won a close decision over Andre Dirrell, dominated every round against Abraham, and took down the always tough Glen Johnson.  His only loss was an extremely close fight against Kessler where Froch had to have learned plenty in defeat.

Wear and Tear: Neither man has been through a career changing fight or taken a beating.  Ward gets the advantage here as he has not even had to break a sweat in many of his fights while Froch had some dragged out battles with Pascal, Taylor, and Kessler.

Prediction: Froch has shown to be a very talented and exciting fighter over the course of this tournament but I just don’t think he will be able to match the diverse skill set of Andre Ward.  Ward will simply have more tools in the chest to break out.  The fight will likely have several shifts in momentum as both fighters are intelligent and will adjust to what the other is doing.  But Ward will have more options to adjust to allowing him to control more of the action in what will be a boxing match with a few exciting moments where they decide to really engage each other.  Andre Ward wins a unanimous decision eight rounds to four.