It’s been a year of near-misses for British boxing in 2011. The UK entered the year with four legitimate world champions and exited with one, and in-between eleven British fighters failed to win in world title fights.

December turned out to be our winter of discontent. Amir Khan surrendered his IBF and WBA light-welterweight belts to a resurgent Lamont Peterson, and promptly made something of a fool of himself in blaming everyone and everything but himself for the defeat, when in truth he’d simply been bamboozled by a smarter and more intelligent foe. A week later, Carl Froch showed young Amir what it is to be classy in defeat, when he magnanimously accepted a drubbing at the hands of the excellent Andre Ward in 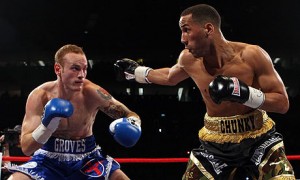 Atlantic City. Froch was earnest, brave and resilient – qualities that failed to match the spectacular talents of Ward, who may well go on to become something very special. Khan and Froch remain class acts, and they should bounce back in 2012.

Also in December the two Murray’s, John and Martin, failed in their respective bids to take world titles from two good champions. John put on a characteristically gritty display against Brandon Rios, but was hopelessly outgunned, and Martin appeared to have done enough over 12 rounds to relieve Felix Sturm of his WBA middleweight crown, but isn’t the first, and won’t be the last, to be robbed of a decision when up against a German on German soil. Murray’s draw was at least a moral victory.

Perhaps our highest profile failure was that of WBA titlist, David Haye, who in July traveled to Hamburg to try to rip the IBF and WBO heavyweight titles from the iron grip of Wladmir Klitschko. Despite Haye’s promise of fireworks, he went off in the fight not with a bang but a whimper, and limped home (literally) with a one-sided decision loss. Haye promptly then retired in somewhat pantomime fashion in November, according to a long-standing promise he’d made with himself, but is still angling for another crack at a Klitschko, this time the older brother Vitali. The Ukrainian behemoth, and WBC champion, has set a date in March with another British fighter, Dereck Chisora, but may well see fit to entertain Haye next year in another summer “extravaganza”.

Earlier in the year, Saul Alvarez padded out his burgeoning reputation by turning back two British challengers to his WBC light-middleweight title – in March in California he comfortably decisioned Ricky Hatton’s brother Matthew, and then he produced an impressive display to stop the mercurial but homesick Ryan Rhodes in Mexico in June.

Ricky Burns ended 2011 on a high with an impressive points win over Aussie hardman Michael Katsidis, but he’d handed back his WBO super-featherweight belt to operate as a lightweight (also perhaps to avoid a confrontation with the on-coming American Adrian Broner, who has since picked up the title). Burns ends 2011 with a WBO phantom title on his mantelpiece, but won’t be recognised as a “proper” titlist unless he wins the WBO’s real lightweight belt in 2012 – and he’s already rumoured to be penciled in for an all-British clash for that vacant gong early in the year with Manchester’s Anthony Crolla.

Which leaves us with the UK’s sole world champion as we leave 2011 behind – the brash Welshman Nathan Cleverly. Cleverly was gifted an opportunity to fight for the vacant WBO light-heavyweight strap when Juergen Braehmer went missing earlier in the year, and Cleverly obliged with an easy stoppage of little-known Pole, Aleksy Kuziemski, in May. Cleverly then defended later in the year with a points verdict over local rival Tony Bellew, and is now looking across the pond for opportunities to get in amongst the Hopkins’s and Dawson’s of his division. Cleverly is an engaging and intelligent young man (he holds a maths degree), with a crowd-pleasing style, and could make some noise in 2012.

On the domestic scene the UK has much to be positive about. Heavyweight Dereck Chisora will finally get his chance at a Klitschko in March, having been conned out of a decision in Finland when he plainly out-punched local favourite Robert Hellenius this month. Chisora surrendered his British heavyweight crown to 23-year-old Tyson Fury early in 2011, when he was clearly out of shape, but has been given a chance against Vitali Klitschko, who, like his brother, rarely puts himself in a fight he doesn’t think he can win handily. Fury will be an interesting one to watch in 2012. He nearly came unstuck in November this year, when little-fancied Neven Pajkic dropped him on the seat of his pants. Fury is big (6 feet 9 inches), crude and exciting- but has a worrying disregard for his own safety in the ring which might see him found out in 2012.

Perhaps the most high profile and eagerly awaited British fight of 2011 featured our 2008 Olympic gold medalist James Degale in a scrap for the British super-middleweight title against fierce rival George Groves. Degale pushed the limits of good taste in some pretty puerile pre-fight trash-talk, and then failed to pin down Groves over twelve rounds, so that Groves walked away with the tightest of decisions, and the British title. Both Groves and Degale carry on the British super-middleweight tradition, that has featured the likes of Calzaghe, Benn, Eubank, Collins, Woodhall, Reid, and Froch, and both young fighters are expected to make an impact internationally in 2012.

There’s a wealth of domestic talent coming through, so expect to hear from the likes of Kell Brook, Kevin Mitchell, Lee Selby, Anthony Crolla and Scott Quigg in the next twelve months, who all should be coming into world class before 2012 is out.