After a much-needed vacation and some down time to recharge the batteries, I’m ready to keep taking swipes at boxing’s scum bags as well as the free swag-loving media swine who run interference for them. Many thanks to Tim Harrison who did a great job with the Monday Rant in my absence and took over some behind-the-scenes duties while I played the role of slacker.

Now, back to the grind.

As I’ve been saying for awhile now, Julio Cesar Chavez Jr. is by no means the bumbling fool he was made 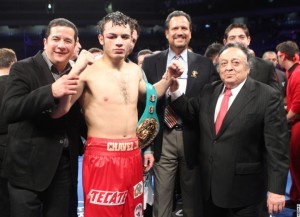 out to be as recently as two or three fights ago.

A few “mean” bloggers and undercover mainstream guys who, each week, guiltily devour the Monday Rant under their covers with a flashlight, have “discovered” this as well.

Chavez has beaten three top 10 middleweights and, with his unanimous decision win over Marco Antonio Rubio last Saturday, he has now beaten a top 5 middleweight. Of course, this is hardly a golden age of 160-lb talent. Most of the division’s top 10 is made up of failed title challengers and unproven prospects. Rubio himself, despite a lofty #5 ranking, is really little more than a solid, lunch pail-carrying blue collar fringe fighter whose biggest fights were a stoppage win over an overrated, underdeveloped David Lemieux and a one-sided RTD loss to Kelly Pavlik.

Still, Chavez beat Rubio handily, and if we’re going to look at boxing like a real sport with real rankings, that means something. And it means that Jr., whether detractors like it or not, is a legitimate Top 3 middleweight (according to The Boxing Tribune’s Unbiased World Rankings).

On the flip side, though, Jr. may very well be the poster boy for boxing’s ills–a living, breathing embodiment of everything wrong with the modern fight scene.

Unlike some high-end prize fighters who work the system like a speed bag and feign honor and bravado when called on their shortcuts, the boy king from Culiacan makes no pretense about respecting the conventions of the sport and, really, offers no excuses for what has been done in his name.

Everybody who follows the sport knows that the game has degenerated into something akin to a grade school being run by pedophiles. Chavez Jr. is just one of many who benefit from boxing’s rancid modus operandi.

With no credible central authority in the sport, the promoters, managers, and fighters pretty much call all the shots. Anything to the contrary is just for show.

Champions are conceived and created by management-types with suitably easy challengers being groomed by the sanctioning bodies, who, conveniently, also get their marching orders from the same money men.

Chavez, who served a seven month suspension for testing positive for a banned substance in a 2009 fight with Troy Rowland, even waved off the mandatory post-fight urine test and was backed-up by WBC President for Life, Jose Sulaiman, who allegedly shrugged his shoulders and said that the organization had simply forgotten the test.

(The pathetically inept Texas commission, which allowed Chavez to leave the arena without taking the piss test, will be a topic for another day.)

In no other case is it more obvious that the inmates are running the boxing asylum. Chavez and promoter, Top Rank, give the marching orders and the WBC does the stepping. The same could be said for Manny Pacquiao, Floyd Mayweather and quite a few others. But the difference between those fighters and Jr. is that they’ve earned the right to prima donna status after a long career of paying dues. Jr. is sitting in the driver’s seat because of name recognition and the subsequent curiosity factor.

Chavez has made a career out of fighting guys two or three divisions naturally smaller than him and there’s no indication that he’ll stop doing this any time soon, nor that he will ever be forced to do so by the WBC and Sulaiman, who seem intent upon keeping the boy king happy and secure.

I guess we can take solace in the fact that the 25-year-old, who enters the ring re-hydrated to the size of a cruiserweight, is performing his sleights of hand at a much higher level now, beating guys like Rubio and Duddy instead of hapless club fighters in Hermosillo or El Paso.

For those pulling against the second generation star, don’t hold your breath. Jr. is good enough to solidly beat just about anyone in the middleweight top 20 and connected enough to never have to fight the two or three guys with a chance of beating him.

This is the world that boxing anarchy has created.

Jr. may be among the most annoyingly smug of the fake champions, but he isn’t the first to take advantage of boxing’s lawlessness and he won’t be the last.

You can email Paul at paulmagno@theboxingtribune.com or catch him as he raffles off VHS copies of Diggstown in the first ever “Boxing Tribune Triviapalooza.” Paul is a full member of the Burger King Kids’ Club, a born iconoclast, and an ordained minister in the Universal Life Church.