Saturday’s Chavez Jr. vs. Rubio / Donaire vs. Vazquez Jr. HBO double-header in San Antonio Texas, on paper, was a great way to start the year. The end result, however, was a large, steaming turd that reeked of incompetence and corruption. While Nonito Donaire and Julio Cesar Chavez Jr. came out winners, the sport walked away with another shiner.

The opening bout featured Nonito Donaire’s super bantamweight debut against former WBO super bantamweight titlist, Wilfredo Vazquez Jr., for the vacant WBO super bantamweight title. Donaire’s speed and power advantages were apparent early on, as Vazquez was reluctant to open up offensively. Donaire dominated the early rounds and scored a knockdown in the ninth. Most who saw the fight gave Vazquez 3 of the 12 rounds, yet Dr. Ruben Garcia, a Texas-based judge, flipped the script and judged one for the B-side fighter, scoring the bout 115-112 for Vazquez. I’m no mathematician, but that amounts to 8 rounds scored for Vazquez, minus the knockdown. The other judges scored the bout 117-110 (9 rounds to 3). 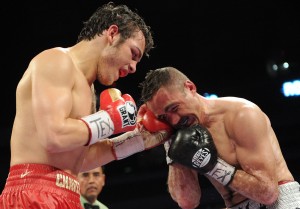 In the main event of the night, Julio Cesar Chavez Jr. made the second defense of his WBC middleweight belt against Marco Antonio Rubio. This could have been a shining moment in the career of Chavez. While Rubio isn’t a world beater, he had been in the ring with quality opposition and was one of the top opponents at middleweight not named Sergio Martinez.

The day before the fight, it was revealed that Chavez had trouble making the 160-pound limit and was forced to shed no less than 5 pounds on the last day. He stripped down to his birthday suit and weighed in from behind a blanket, as Texas officials and Jose Sulaiman looked on.

To make matters worse, only hours before the fight it was revealed that Chavez was arrested and booked for Driving Under the Influence in Los Angeles at 4:38 AM on January 22. His unofficial weight at the time of his arrest is listed as 175, or 15 pounds heavier than the middleweight limit (and 6 pounds less than his unofficial weight when he entered the ring on Saturday night).

Chavez would go on to score a tough unanimous decision victory over Rubio, using his 10-pound weight advantage to bully Rubio around the ring and rough him up on close quarters. To his credit, Chavez executed the perfect game plan to take away Rubio’s long right hand by forcing the fight to his chest. Duane Ford, a Nevada-based judge, scored the bout 116-112, Canadian judge Jack Woodburn scored the bout 115-113, and Texan (also a veteran of dozens of WBC title fights in his career) Glen Rick Crocker scored it 118-110.

The Texas-based, WBC-preferred judge’s lopsided scorecard wasn’t the most glaring irregularity of the night. Open scoring was used, and this was pointed out by HBO’s Harold Lederman during the broadcast. Lederman pointed out that open scoring, a procedure used only in WBC title fights, is not permitted under the Association of Boxing Commissions, yet it was employed under the Texas Commission, a member of the Association of Boxing Commissions.

In the wake of the controversial evening, Rubio’s team stated it would protest the fight when they announced post-fight drug tests were not administered, as required in all WBC title fights. Sulaiman’s response to Rubio’s claims was to pass the buck to the Texas Department of Licensing and Regulations (TDLR).

“We are not responsible for that review. If a drug test was not performed, that is something that always corresponds to the local commissions – which in this case was the responsibility of the Texas commission and not the World Boxing Council. The WBC cannot get involved in the internal affairs of the commissions. It is up to Texas to respond to those claims,” Sulaiman would tell BoxingScene.com.

WBC rules state the local athletic commission is responsible for any testing, as stated in rule 4.31. Conveniently the TDLR does not require a post-fight urinalysis to screen for banned substances. Rule 61.47, subsection (q) of the TDLR’s rules states:

A person who applies for or holds a license as a contestant shall provide a urine specimen for drug testing either before or after the bout, if directed by the executive director or his designee. The applicant or licensee is responsible for paying the costs of the drug screen.

As you can see, the option of a pre or post-fight urinalysis only if directed by the executive director allows enough room to slither around traditional protocols employed by any halfway competent athletic commission.

The aforementioned does not completely remove the WBC and TDLR from any blame in the matter, as rule 4.32 of the WBC’s rules states:

The procedures in question are listed in WBC rule 4.36, subsection (a) and it is clearly stated that acceptable testing protocols must include a post-fight urinalysis:

The antidoping tests shall be taken from the urine of the contending boxers immediately after the bout, at the dressing room or place designated by the doctor. The WBC may authorize the samples to be taken before the bouts only in places where a law or rule so requires.

So while WBC President for Life, Jose Sulaiman, and Dick Cole, executive director of the Texas Department of Licensing and Regulation, play hot potato with the blame for this matter, the fact remains that Chavez rehydrated 22 pounds in 24 hours. And when a fighter has a recorded history of using banned diuretics to make weight (Chavez was suspended 7 months by the Nevada State Athletic Commission following a positive test for a banned diuretic in his bout with Troy Lowry), a post-fight urinalysis should not be something that is so nonchalantly bypassed.

I am not outrightly accusing Chavez or his team of foul play in this matter, but considering the l lackadaisical nature of Texas’ antidoping policy, coupled with the WBC’s outright refusal to shoulder any of the blame for not enforcing their own rules, it certainly smells fishy.

Should you be interested in posing your own inquiry to the WBC or the Texas Department of Licensing and Regulation, or just to voice your displeasure, you can contact the WBC (based in Mexico) via email at: contact@wbcboxing.com. The email is that of the assistant to WBC president, Jose Sulaiman. I have chosen to withhold his direct email address out of common decency.

The phone number for the Texas Department of Licensing and Regulation is (512) 463-6599, and the general email address for public contact is cs.combative.sports@license.state.tx.us.