On June 9th in Las Vegas, two of the ten best fighters in the world pound-for-pound will square off in a welterweight title fight.  One of them, pride of the Philippines Manny Pacquiao (54-3-2, 38 KOs), is one of the sport’s true international superstars.  The other, American Timothy Bradley (28-0-0, 12 KOs), is an undefeated young champion looking to graduate from the ranks of fighters, who while very good, are not yet massive attractions.  Bradley’s hunger to prove himself on the biggest stage and Pacquiao’s desire to remain on top of the sport, set the stage for an intriguing battle.

Yet the announcement of this match-up has been met with some animosity and skepticism.  Of course, the elephant in 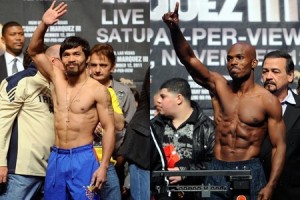 the room when discussing any Pacquiao fight, or one involving a certain fellow welterweight belt-holder, is the obvious question of why the fight to end all fights has not been made.  However without going off on a tangent about the oft-discussed super bout, let’s just say that we can’t watch or cover fights that aren’t happening.  Until the big one is signed, no reason to not take a glass half full tact and enjoy what we get in the mean time.

Some of the negativity however is directed squarely at Bradley himself.  While he’s proven himself as a top level fighter, he hasn’t always provided the kind of flash or spark that gets fans’ juices flowing.  Bradley’s strong, but not a big knockout puncher.  He’s fast, but not in a dazzling “Roy Jones” kind of way.  Really, “Desert Storm” is just a good all-around, if not that exciting, fighter.  Another problem with his style is a perception, at least partially deserved, that he is a bit of a dirty fighter.  Several Bradley opponents have been cut from headbutts, the intentionality of which is debatable.  In particular, two of his recent bouts have been stopped prematurely because of these injuries.  Naturally, the last thing any fight fan wants is for Pacquiao to be fouled and injured in a pay-per-view bout and to be out 60 bucks.

These concerns are not totally illegitimate, but why not look on the bright side a little bit.  Bradley certainly has heard these concerns and would be wise to take them seriously.  At 28-years-old he has plenty of career ahead of him, and the best way to ruin it at this point would be taking the blame for a big time fight that turns into a dud.  The referee, hopefully, will notice any attempts by Bradley to come in head first and take action to stop it before anything too disastrous happens.

If fouls and accidental injuries are avoided, some good, old-fashioned, within-the-rules injuries are likely.  Both Bradley and Pacquiao are for the most part offensive fighters.  Bradley is not the clever counter puncher that Juan Manuel Marquez (Pacquiao’s last opponent who gave him so much trouble) was, and will likely be much easier for Manny to find and hit.  Bradley also does not appear to be the kind of opponent (like Joshua Clottey and Shane Mosley were) who will be happy to avoid contact for 12 rounds and collect his paycheck.  He has won every fight of his career, despite not being supremely skilled, largely due to his heart.  Do not count on Bradley taking his first loss quietly.

Despite Bradley’s desire to win, it is not likely to be enough.  Pacquiao hasn’t lost in seven years for a reason–he’s a great, great fighter.  He’s a better athlete than Bradley, at least equally skilled, and he has a vast experience advantage in big time fights.  Bradley is just good enough to push Pacquiao and make the fight entertaining without actually winning.  In a way, it’s a perfect situation–on June 10th we can start talking about getting the big one made again.