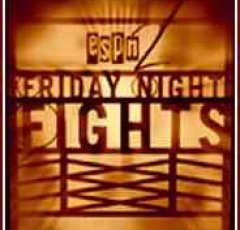 Roberto Garcia’s promoter knew that the best chance Garcia had for winning the fight would be to force the fight to the inside and built the ring accordingly. Even though the promoter claimed it was a regulation-compliant 16-foot square ring, ESPN2 independently measured the ring at 15 feet 8 inches, making it the second-smallest boxing ring ever used on that series (David Lemieux fought Elvin Ayala in a 15’6” ring outdoors in Montreal back in the summer of 2010). Smith, who prefers to fight on the outside, was left with his back constantly against the ropes as he seemed uncomfortable with distances he could normally work at as a fighter and was surprised when he kept running out of room.

In addition, Smith’s tendency to bark like a dog whenever he throws a punch made it much easier for Garcia to time him, and combined with Smith’s very slow pullback of his fist after throwing a punch, this was a potent weapon in Garcia’s arsenal. For ten rounds the story was the same for each three-minute interval, as Garcia controlled distance, landed the harder, cleaner shots, and showed vastly superior ring generalship. When the decision came down, Garcia took it 98-92, 97-93 (twice), with The Boxing Tribune scoring the fight 99-91 for the consensus winner and Teddy Atlas giving Garcia a 98-92 score. The rounds at issue appeared to be the first, fourth, and sixth rounds; the other seven rounds were not in dispute.

Tyrone Brunson, meanwhile, showed us the difference between a guy who can punch and a guy who can fight. Landing exactly one meaningful shot in an entire eight-round night of work is only worth something if the one punch ends the fight in your favor (see Micky Ward vs. Alfonso Sanchez for the ur-example). Unfortunately for Brunson, his opponent James De La Rosa easily beat the count and even came back to erase the 10-8 round in favor of a 10-9 outcome on the card of both Teddy Atlas and your columnist.

The rest of the fight was no more competitive. De La Rosa certainly respected Brunson’s power after tasting the floor in the second round, leading him to fight on the outside, keeping Brunson’s hands up in a defensive position and being only as aggressive as he needed to be in order to control his opponent and keep from getting hit. It wasn’t so much that De La Rosa dominated his opponent as it was that the fight was a complete mismatch of skill, with a genuine boxer, albeit one with a very suspect chin, fighting a glorified tomato can whose record was purely a function of his hobo-quality opposition previously in his career.

Brunson even addressed the issue, lamenting his decision to go for easy prey in compiling a record, but to your columnist’s eyes it wouldn’t have mattered. Tyrone Brunson simply cannot fight. He can punch, but throwing a punch and boxing are not the same thing. If he stepped up in his sixth fight, that just would’ve made him 5-1 instead of 21-1.

Due to both fights going the distance, there were no swing fights to make air tonight. This has been an epidemic on ESPN this year; the paucity of knockouts has not augured well for young talent looking for four rounds on television.

Next week, ESPN2 travels to Foxwoods Casino in Mashantucket, Connecticut, for a fight that has a very real chance at being the best thing to air on the network since Wolak-Rodriguez I. Hammerin’ Hank Lundy (21-1-1, 11 KOs) takes on hard-hitting but untested Dannie Williams (21-1, 17 KOs) in both men’s continued quests for a title shot at lightweight, while in the co-feature Elvin Ayala (24-5-1, 11 KOs) takes on Hector Camacho Jr. (53-4-1, 28 KOs) in a battle of two guys knocked out in the first round by David Lemieux on ESPN-televised matches. Those fights air Friday night, March 30th, at 9 PM Eastern/6 PM Pacific on ESPN2 and online at ESPN3.com. The Boxing Tribune will have a full preview and recap of the night’s action, including any swing fights that make air. Stay tuned to the worldwide leader in covering the Worldwide Leader.