On Monday, a Fulton County jury in Atlanta, George convicted Jquante Crews and sentenced him to life in prison without parole plus ten years for his involvement in the killing of former world champion, Vernon Forrest in 2009. 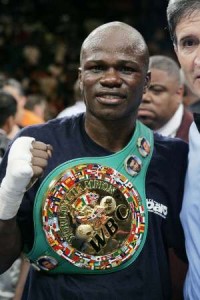 The 28-year-old Crews, who drove the getaway car following the murder, is the second person convicted for the murder.

In August of last year, 22-year-old DeMario Ware, who initially robbed Forrest at gunpoint, but did not fire the kill shots, received the same sentence as Crews.

On the night of July 25, 2009, DeMario Ware robbed Forrest at gunpoint, taking the boxer’s gold championship ring and Rolex watch. Forrest would produce his own handgun and give chase to Ware, who ran and hid in a nearby apartment building. After giving up the chase, Forrest started to make his way back to his car when he was shot twice in the back by co-defendant Charman Sinkfield, who then walked up to the fallen fighter and unloaded eight more shots. After the murder, Sinkfield, Ware, and the third co-defendant, Jquante Crews, would flee the scene of the crime in Crews’ car.

Prosecutors will bring Sinkfield to trial next and are pursuing the death penalty.