I regularly read two boxing websites. I read TheBoxingTribune.com and I read the message boards at TheBTBC.com. That’s pretty much it. Every once in a while I click through The Ring Magazine’s online monstrosity, but mostly it’s just The Boxing Tribune.

It’s not that I don’t like to be informed on what’s going on, but I’ve got things to do, and when I’m at home, reading horrible bleacher reports is the last thing on my mind. Usually if something good is happening, Paul Magno or somebody else from the boards will bring it up for discussion.

It’s not very often I feel compelled to write something, but I think it’s going to be a slow news week and I figured maybe there was somebody out there like me who just likes having something to read from their favorite website, even if it’s my opinionated swill. 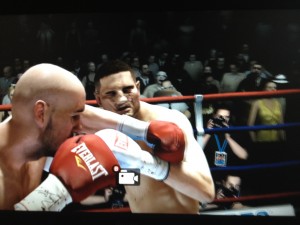 I recently purchased an XBOX Kinect. The Kinect is a pretty amazing piece of technology that allows your full body to be tracked by magic as you dance or dodge your way to victory in one of about 5 decent games made for it. To be honest, I got it for Dance Central 2, which is an amazingly fun game if you can get over what an idiot you must look like playing it. The technology is fantastic and it got me thinking that surely EA must be planning a Kinect interface for the next installment of the Fight Night franchise.

And then that got me thinking, maybe the Kinect’s camera can finally allow me the ability to create an amazing boxer that looks like me. Only about a handful of people actually bought an XBOX Vision Camera, and I really cannot think of a game that utilized it in any way that mattered. But Fight Night Champion had a feature where you would take pictures of your head at different angles and it would map your face onto a body. You could essentially play as you, a muscled, athletic, awesome, you. Unfortunately for me, I didn’t buy the Vision Camera, it was not really worth it, especially since I would probably only use it once. Thankfully EA allowed users to upload pictures and create a fighter online… unless you used an Apple, which they did not support.

So I did not make a fighter last year when Champion launched.

But the Kinect has a camera, so I figured I would give it a shot and finally make my dude and become the Greatest of All Time—oh, except the game doesn’t recognize the Kinect’s camera, of course. It seems like this would be an easy patch. EA could just release a downloadable update that recognizes the Kinect and viola, you have a cool dude (or woman with a man’s body) and you can get climbing the Pound for Pound rankings…

But let’s be honest, EA will never do that. In fact, I have a nagging suspicion that they haven’t done much of anything with the game since it launched aside from tweaking simple settings. The last time the game was updated was sometime in September of last year, and all that did was adjust stamina ratings and some gameplay issues.

But, character creation aside, I had the game in my console already so I decided to give it a going over again to see how it held up. It turns out I had a boxer with an unfinished career in Legacy Mode, so I loaded him up and took a look at it. I had accrued huge surplus of experience points that I hadn’t used yet so I went to adjust my stats and really had some good stuff maxed out, until I tried to save and got a notice that said “Your boxer has reached his skill level cap! For now…” and then I remembered why I stopped playing to begin with, with no ability to keep progressing in skills, what’s the point?

There’s a reason why the most recent installment of the Call of Duty: Modern Warfare franchise is so addicting in multiplayer: filling bars. Yes, it’s that simple. You run around and do stuff and kill things and bars seem to be constantly filling, informing you that you’re progressing in this and that, and for some reason, this is incredibly satisfying. With none of this going on past a certain point in Champion, the player is left with no reason to continue playing Legacy Mode. I got that “…for now” message a year ago, and apparently what they meant to say was:

“Your boxer has reached his skill level cap! Bye!”

So for the last 20 or so fights of your career, enjoy ignoring sponsors with their pathetic $5000 bonuses and pushing heavy bags along backgrounds in Big Bear and fighting the same 6 dudes who hover around the top 5 fighters in your weight class, because you have no choice if you want to get that GOAT ranking.

This really made me miss earlier iterations of Fight Night, in which I could make fights at other weights if I wanted to (not just when the computer forced me to) and also fight mismatched palookas to pad my record. This game is supposed to be better, but Legacy Mode (which is essentially the standard gameplay mode from previous titles) is really poorly thought out. You should be allowed matchmaking freedom. If I want to have a billion fights against doomed tomato cans and splatter their plasma all over the canvas, then let me do so.

Speaking of plasma, the Fight Now feature is just fine. I’ve been enjoyably killing time lately fighting people I don’t like. I even downloaded a Hitler to demolish from the EA servers although he’s amazingly resilient to facial damage which is a let down. Last night, in fact, I spent around 2 hours fighting match after match against Victor Ortiz who just bugs the crap out of me and had a grand old time. Somewhere around the hour and a half mark, I realized that I like Victor’s game entity more than him. His little polygon persona has awful defense and really just comes apart at the sockets. He hits hard, though, so there’s a certain amount of danger that keeps you playing careful as you drop hooks into his skull in payment for him ruining the Mayweather fight.

The Legacy Mode is just simply… bizarre. I mean, the game is fun, but there are aspects about it that are just awful. The training mini-games are accurate in which they feel tedious and not fun. Pound for Pound rankings are absolutely without logic and year end awards are completely vague. 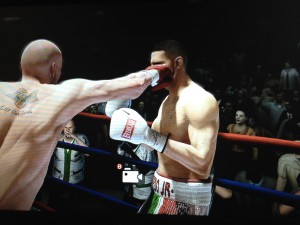 Every “year” the game is interrupted as you have to scroll through boring updates that don’t concern you whatsoever. Fighter of the Year, Round of the Year, Fight of the Year etc just ends with nothing. What’s the point of telling me who fought the round of the year if I can’t even see the stats on it? A clip might be asking a lot from the processor, but at least give me some stats so I can attempt to figure out the logic that goes behind making these decisions.

I don’t understand how I can have cleaned out two divisions and have a perfect 42-0 (42) record and NOT be #1 Pound for Pound because there’s some dude up there who’s 53-17-2 (21). I mean, WHAT? There’s some very bizarre computations going on behind the scenes.

And don’t get me going on how Kelly Pavlik’s eyelashes multiply and render farther and farther off of his face as the fight progresses. Nothing makes me marvel at modern technology more than seeing a 9 inches of eyelashes sticking out of the side of Pavlik’s head as his seconds coach him between rounds.

I could go on and on about this game. They added in a storyline mode where you get to play through just about every boxing cliché you can think of, but it’s unpolished even if it is cool. After the launch excitement wears off, the game feels like a bunch of decent, but not great ideas.

Still, it’s the best boxing game out there, and if you’re not so picky about the banal nonsense I just ranted about, then you could be in for a good time. The graphics are mostly great, the controls are mostly solid and you can play it for a few minutes as the wife gets ready to go out, complete an entire fight and not get in trouble. Also, as it’s a year old, you can easily find new copies for about $30. EA hasn’t announced any new iterations yet, so as far as getting your boxing fix goes, it’s a hole in one. Zing!