(note: This is the first in what I hope will become a series of me playing around with other writers’ writing styles like a literary Weird Al Yankovic. I begin with a riff on Ben Thompson, whose site BadassOfTheWeek.com is a Friday favorite of mine that gets me in the right mind frame to watch FNF.)

Boxers are, by definition, a pretty badass lot. Any time your job description involves a fairly high probability of getting punched in the dick by a well-muscled guy, and you’re not a gay porn star, your status as one hardass motherfucker should not be questioned. In addition to getting your manhood introduced to a leather-clad fist, there’s also the possibility that you’re going to end up having a Vincent Van Gogh pulled on your ear by an insane psychopath (Evander Holyfield) or else having your ear cut like Michael Madsen in Reservoir Dogs tied you to a chair (Sebastian Lujan, against Antonio Margarito on ESPN in 2005.) 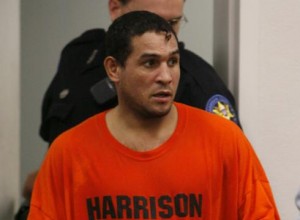 Into this world of pugilistic dick punching and facial abuse came a Puerto Rican (which I’m told is kind of like a Mexican except they don’t have to show papers to immigration officials in Arizona because they have US passports) named Hector “Macho” Camacho. Just look at that name. In a sport dominated by manly uber-dudes, the guy had “Macho” right there not only as his nickname, but baked into his surname as if to say “Look out world, badass coming through.” That’s a name that brings with it an automatic +1 Mace of Bludgeoning right on the character sheet.

Camacho proceeded to blast through a bunch of hobos, including Jerry Strickland, who brought a 9-52 record into his fight with Camacho in April of 1981, and who would go on to be knocked out a total of 78 times in his professional career. Camacho got rid of Strickland in two rounds, and I like to imagine him yelling “I’ve fought mudcrabs more fearsome than you!” and “Why. Won’t. You. DIE?!” during the fight in Spanish.

Eventually the word got out among the hobos that Camacho was not to be trifled with, so El Macho Hombre had to move on to prey that actually had a chance to fight back, as if a lion on the Serengeti said “Screw these gazelles, I’m gonna go eat a honey badger.” The honey badger in question was Rafael Limon, whose last name manages to mean both “lemon” and “lime” in Spanish, so he was basically a cross between a ninja turtle and a can of Sprite. The WBC said the fight would be for the super featherweight championship, which means automatically that whoever won would be 77% more badass than a regular featherweight.

Of course Camacho won, because punching a can of Sprite in the face was easy work for a guy chosen by the gods to be an instrument of pugilistic badassitude. “Macho” won his first 38 fights as a pro and stepped into the ring against Greg Haugen in 1991 for a title at 140 pounds, the WBO’s “light welterweight” title. Supposedly welters are bigger than feathers, even super feathers.

Haugen wasn’t about to let this cross between a lion, a honey badger, and Chuck Norris stop him from claiming a title for himself, and having a German name couldn’t have hurt as Haugen won a split decision, the judges unable to choose between a guy with a Nazi name and a guy with “Macho” in his moniker. The WBO ordered a rematch, and again judges were indecisive, Camacho winning by split decision, so for those of you scoring at home, the two fights were three judges to three for each man.

Sadly Hector Camacho’s aura of invincibility was shattered once and for all, as he would never again be champion of the world at any weight. Greg Haugen killed the beast inside and made the world nevermore fearful of Hector “Macho” Camacho. Julio Cesar Chavez beat Camacho in 1991 by unanimous decision for Camacho’s 140-pound crown, Felix Trinidad proved superior in 1994 for the IBF welterweight title, and Oscar De La Hoya took Camacho’s lunch money in 1997 for the WBC 147-pound crown. Camacho was last seen in a boxing ring as recently as 2010, ten days shy of his 48th birthday and 30 years removed from his pro debut, where a garden slug (a far cry from a honey badger) named Saul Duran (who got his brains beat in a year later by not-even-close-to-badass Demetrius Andrade) handed Camacho his sixth loss. To Macho’s credit, however, he never got knocked out, always going the distance with every fighter to best him while making starched shirts of 38 of his own 79 conquests.

Camacho seems not to have lost the killer instinct, however; unable to beat up grown men in boxing rings, he has turned to beating up his own son, turning himself in to authorities on a child abuse charge stemming from an altercation with one of his offspring (though notably not his namesake; Hector Camacho Jr. has compiled a 53-4-1 record as a professional, but is not nearly as durable as his father, having been stopped twice.

If Macho Camacho ends up in prison from his recent crimes, it may be part of his master plan to punch men in the dick in a new milieu; to earn a reputation at age 50 as the toughest Spanish-speaking hombre in the joint would simply be the capper to an illustrious life as a guy who gets all up in the grill of lesser men and punches them until they fall down and cannot stand up. That makes Hector Camacho a certified, honest-to-gods badass. Look out, prison dudes, and protect yourselves at all times, like the boxing dudes like to say.

Fox Doucette covers Friday Night Fights for The Boxing Tribune. His weekly column, The Southpaw, appears on Thursdays. He hopes someone forwards this to Ben Thompson and that Mr. Thompson enjoys this tongue-in-cheek parody of his style. Fan mail, hate mail, and +1 Maces of Bludgeoning can be sent to beatcap@gmail.com.