The temptation in the world of boxing journalism is to err on the side of a good headline. Writers and website owners will often take the slightest hint of a story, run with it, and cross their fingers that things don’t blow up in their face. Then, the third rate, SEO-juicing bloggers take these glorified rumors and use them as click-fodder for their own sites. 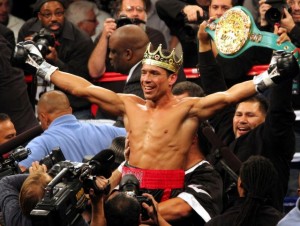 A perfect example of this happened earlier this week as scribes and editors struggled for content in a slow news period.

The news report of Sergio Martinez signing to face the winner of the June 16 Julio Cesar Chavez Jr.-Andy Lee bout is nothing more than wishful thinking with a touch of coercion thrown in.

While Martinez would love a big money, high profile bout with Chavez Jr., the truth of the matter is that it’s still more of a message board dream fight than an actual reality. The bout is no closer to being made than it was a year ago when Jr. picked up the WBC belt from the boxing dumpster after it had been stripped from Martinez.

Sure, Martinez is committed to fighting the winner of Jr.-Lee, but he’s the only one committed to this arrangement. Neither Lee nor Chavez Jr. have signed any such deal. And while Andy Lee, a promotional stablemate of Martinez, might be a slam dunk to meet Martinez if he should defeat Chavez, Jr.’s promotional company, Top Rank, is noncommittal on any Martinez bout.

At the end of the day, the only story to come from this is that Martinez wants to fight the winner of Julio Cesar Chavez Jr. vs. Andy Lee– something we already knew.

Another rumored bout that captured headlines this week was Tomasz Adamek vs. Eddie Chambers, a fight between two undersized heavyweights that would likely be a good, solid contest.

While this bout has a much better chance of happening than Chavez Jr.-Martinez, the fact of the matter is that neither fighter has signed a contract yet. To take this buzz and run with it as if it were a real story is a little on the optimistic side, especially considering Chambers’ history of pulling out of fights and the fact that both are coming off injuries.

So, really, with the Martinez-Chavez-Lee triangle and Adamek-Chambers stories, all we have is fan buzz with the hint of something more solid behind it. This, of course, doesn’t mean that these fights won’t get made. It just means that there’s nothing firm or official about them yet. As such, they are not news stories.

Now, when there are signed contracts and firm commitments from all parties involved, The Boxing Tribune will report on these bouts and reap the benefits of story-hungry fans looking for info. Until then, although it may cost us precious clicks, we prefer to report on things that are actually happening and save the rumors for social media sites and message boards.