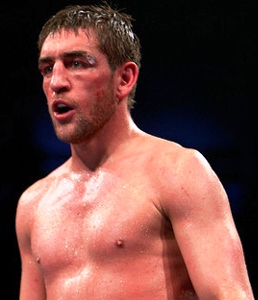 Arthur was much decorated as a super-featherweight, winning multiple British, European and Commonwealth title fights, but at 33 he’s now campaigning as a light-welter. He failed in his only bid at a world title when in 2008 he was comfortably outpointed by fellow Brit, Nicky Cook, for the WBO belt.

On paper Frontin, who’s lost 12 of his 15 fights, should provide nothing more than a tune-up for Arthur as he tries to establish himself at the higher weight.

Also on the bill, middleweight Craig McEwan seeks to get his career back on track with an eight-rounder against Paul Morby. McEwan, a Scotsman who had been forging a career Stateside, had an awful 2011, surrendering his unbeaten record in March when he stepped up in class to challenge Andy Lee and was stopped in ten, and then in November when he was stopped by undefeated Peter Quillen in Mexico. Now 19-2, 10 KO’s, he fights for the first time in his native Scotland, and should return to winning ways against Morby, 6-12, 0 KO’s, who’s been hand-picked to help McEwan restore some confidence.