Armenian born Vic Darchinyan (37-5-1, KO27), is one or two more disastrous showings away from being the recipient of a knockout-of-the-year type Youtube video. The ‘Raging Bull’ has posted yet another loss to his rapidly degenerating professional ledger, now dropping 4 of 7 fights in his two-plus year hunt for a bantamweight title. There was a time when Darchinyan had the same icy cold, dead-eye stare usually seen in hired mercenaries, Alaskan king crab fishermen/ice road truckers or 350 lb Swiss ex-bodyguards named Magnus. At the height of his powers, Vic was intimidating and merciless to all who opposed him. 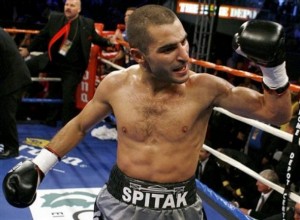 One major advantage that Vakhtang (thankfully shortened to Vic) Darchinyan always held at the lower weights was his destructive, sometimes frightening power. The diminutive southpaw power slugger frequently found a home for his devastating, tide-shifting knockout punches and was often named pound-for-pound, one of the hardest punchers in the sport. That’s not to say that you would ever confuse him with a classically trained boxer, though. Vic does not throw straight punches. He fights from a very loose, open– almost irresponsible guard– often throwing wide, sweeping overhand lefts. A sneaky-quick jab and an under-utilized uppercut round out some of his better offensive tools. He is, however, a natural flyweight, capturing eight World titles in three weight classes and being recognized as one of the best from his native Armenia and one of the top all-time flyweights fighting out of Australia (where he currently resides).

The last time we saw Darchinyan on the main stage of a major event was in the Shotime Bantamweight Tournament of 2010-11. In what was deemed an unfortunate loss to unbeaten Mexican, Abner Mares, Vic put forth a solid account of himself, often times administering a harsh beating on the young former Olympian. Despite repeated low blows (and warnings for said infractions) that marred the entire contest, Mares was only penalized one point in the fourth round but continued to batter the spirited Armenian’s belt line and balls for the duration of the contest. Many felt that Darchinyan did enough to win the bout, but failed to receive the nod from the Tacoma, Washington judges. He would also suffer unanimous decision loses to Bantamweight Tournament co-participants Anselmo Moreno and earlier to Joseph Agbeko – Vic was sent to the back of the proverbial feed line. However, this wasn’t the first time that Darchinyan would incur a loss.

In fact, the only time Vic Darchinyan was defeated below the bantamweight limit was against the athletically gifted Nonito Donaire.

Nonito the ‘Filipino Flash’, was avenging his brother Glenn (whose jaw was broken and was subsequently stopped in 2006 by the Raging Bull) and was moving down to the flyweight division for the first time in many years to accept the assignment. In a fight that was later named upset of the year and knockout of the year, Nonito out-landed and out threw the Armenian champion en route to a TKO victory delivered by an educated and powerful left hook in the fifth round. Darchinyan claimed that this was his last fight at flyweight, but continued competing at the weight for vacant minor belts.

The stalking, ambush style that made Vic infamous in the lower weights will undoubtedly be his undoing if he remains at 118 pounds. It seems the blueprint has been written on Vic Darchinyan and more and more fighters are exploiting his defensive liabilities. At this point in his career it doesn’t take a defensive genius to escape or to even dismantle Vic’s Cro-Magnon style of offense.

In his most recent bid for a bantamweight title (and fighting in an auditorium at the beautiful Tokyo International Forum), Darchinyan was rendered ineffective by relatively fleet-footed, light hitting Japanese titlist, Shinsuke Yamanaka. The former undisputed flyweight champion was sadly telegraphing the majority of his wild assault and was seemingly easy to run circles around (which the Japanese champion blatantly did towards the end of their uneventful fight). Yamanaka stayed far enough away to secure a UD victory against the aging Darchinyan.

Determination, raw power and an unorthodox stance may have been enough to turn back the challenges of many foes in Darchinyan’s prime, but now, especially at the extended weight of 118 pounds it seems that an unfortunate trend is developing. In order for Vic Darchinyan to remain relevant he will once again need to either redefine his skills (after the loss to Nonito Donaire, Vic turned into a surprisingly effective boxer/puncher) or move back down in weight to his natural class and have fights with guys he’s still able to separate from consciousness.

As for the time being (and with his diminishing reflexes), Vic has been reduced into a wild bomber who’s simultaneously making average fighters look extraordinary, and who’s desperately looking to land the one concussive haymaker that will bring him what every prize fighter ultimately fights for: Fortune and glory, kid. Fortune and glory.