When is a win not a win?

When you’re not the house fighter and don’t have a couple of million dollar fights on the horizon, that’s when.

Richard Abril was not signed to beat Brandon Rios on Saturday night. He was supposed to lose, lose spectacularly, and pave the way for the real fight on July 14 against PPV co-headliner, Juan Manuel Marquez. 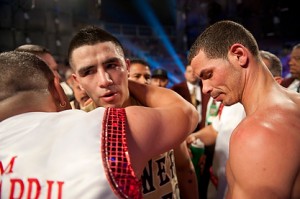 And when he showed some gumption and didn’t lose? Well, they still weren’t going to let him win. It’s just that simple.

Whenever you have one judge, Adalaide Byrd, seeing a fight 117-111 for one fighter and another judge, Jerry Roth, seeing it 116-112 for the other guy, you have a problem.

The bigger problem, though, beyond the scope of this one fight, is the entire system.

When the promoter foots the bill for the judges, referee, and officials, do you actually think the promoter’s fighter won’t get the benefit of the doubt? Do you think there could even be the most minute semblance of fairness?

In case you see my rant this week as overly maudlin and pessimistic, just think about it. I’ve brought this up before, but in all of the controversial decisions over the years, how many have gone against the house fighter? I can’t really think of any at the moment. Maybe a few have occurred, but they are rare to the point of nearly non-existent.

So, with this rigged system in place, the sport’s power brokers continue to do business, like nothing ever happened. And do you know why?

They can twist and distort and manipulate the system, screwing fighters and pissing on the sport with complete impunity because they think these outrages will fade away the moment another big fight comes around. Wave a shiny bauble in the faces of the chimps to distract them while they go about their business.

But boxing’s real fans aren’t stupid. Some are merely patient, willing to tolerate these bullshit occurrences out of loyalty to the sport. Others are just walking away, though.  Loyalty be damned. For them, the good no longer outweighs the bad.

And expect more former boxing fans as controversies become more abundant than good fights. When a group of rapists runs the all-girls high school, why would we be surprised that each year’s fall enrollment is smaller and smaller?

This is not a matter of Rios-Abril killing boxing. Saturday’s fight was merely a symptom of the greater disease.

I don’t think Rios-Abril was the greatest robbery of all-time. I had the fight scored 115-113 for Abril on a very generous card to Rios, giving him credit for aggression. Personally, I see fights like Williams-Lara and Cloud-Campillo as much more egregious robberies. But, still, there shouldn’t be degrees of robbery.

To all the shills in the media– and you know who you are, you rat-fink, pigfuckers– I know you will scramble to summon fake outrage, maybe even spearhead meaningless inquiries. But only because you have to. Because to do otherwise would crotch-punch your credibility and put your free ride and swanky out of town junkets in jeopardy. To you, the truth is a necessary evil, like a colonoscopy or prostate exam. Just close your eyes and think of free swag.

And to the media members who can live with shit like this happening and simply choose to brush it off, then maybe, in a moment of clarity, you should check your conflicts and explore other professional endeavors.

Same deal with the fans. To be a real boxing fan in 2012 means that you need to be a bit of an activist. With the media in the bag and the boxing power brokers raping and pillaging, only the fans have the power to make any changes. Sit back passively and we’ll just keep getting the same old turds dressed up in different packages.

Now, to briefly shill on behalf of The Boxing Tribune.

Our forum (The BTBC) is starting a revamped Predictor League for the hardcore fight fans. Deadline for entry is noon, April 20. You must be a registered member of the forum to participate, but registration is free and easy.

We’re also looking to repopulate our forum with real boxing fans, not fan boys and sycophants. We currently have a small core of hardcore members participating in The BTBC (once referred to as “horrible and nasty” by wanna be members of the elite cigar smoking, free swag-loving media), but we want more. Eventually, we hope to be an oasis for free, independent boxing conversation and critical thinking. So, join up and become one of the foot soldiers for boxing reform.