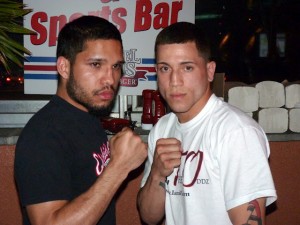 Friday night at the National Guard Armory in Northeast Philadelphia, Power Productions and MakBoxing puts on a ten bout card with a rematch of young prospects and several other local up and comers.  At the top of the bill being called Philly Barnburner Three, is a rematch between lightweights Angel Ocasio 6-0-1 (1 KO) and Jason Sosa 4-1-2 (1 KO) in an eight round bout.

Ocasio and Sosa fought to a draw in a six round contest on January 13 of this year in the same venue.  The first match was billed as a grudge match between North Philly’s Ocasio and Camden, NJ native Sosa.  The fight was heated early but slowed in the later rounds.  Both fighters felt they had done enough to win.  Ocasio received the nod on one card 58-56 while two judges saw it 57-57.  Considering the close nature of the first fight an immediate rematch was obvious and welcomed by both parties.

Ocasio was favored going into the first fight and likely is the favorite again.  Ocasio is considered a talented prospect with speed and solid boxing skills.  He put on his best performance of his young career against Rasool Shakoor in the fight prior to the Sosa bout.  To Sosa’s credit he ignored the underdog status and came to win putting, in a tough effort in the draw.

In the co-headliner talented bantamweight prospect out of North Philadelphia, Miguel Cartagena 4-0 (3 KO) takes on Jose Rivera 3-5-2 of New Rochelle, NY by way of Mexico in a six round bout.  Cartagena was a highly decorated amateur and this will be his first six rounder.  He is extremely talented with speed and power and has walked through his competition so far.  Rivera has lost three in a row.  All three losses were decisions to undefeated prospects so possibly he can give Cartagena some rounds but probably will not pose much of a threat.

Also on the card is local heavyweight Joey Dawejko 6-0-1 (2 KO).  Dawejko had a solid amateur career but was relatively inactive the first two years he turned pro.  As of late Dawejko has been in better shape and he has been more active with this his third fight of 2012 (only fought twice in 2011 and twice in 2010).  Dawejko is opposed by Excell Holmes 2-0-1 (1 KO).  Tim Witherspoon Jr. 6-2-1 (2 KO) is scheduled to appear but at this time does not yet have an opponent.