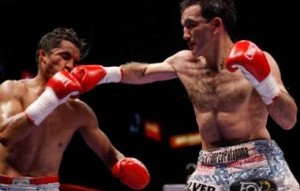 Narvaez, from Cordoba, Argentina, is a two-division champion with long, dominant reigns in the flyweight and super flyweight divisions against varying levels of competition. He captured the WBO flyweight title in only his 12th professional fight. His sixteen successful title defenses spanned seven years and included wins over Luis Lazarte, Carlos Tamara, Rayonta Whitfield, and Omar Soto before the crafty southpaw moved up in weight to capture the vacant WBO title at super flyweight against former world title challenger, Everth Briceno. Narvaez’s three super flyweight title defenses have come against young, inexperienced opponents, and he looks to continue the trend with Cabrera.

Cabrera has won a few minor titles in his young career, and hasn’t stepped up in class since his win over Mexican journeyman Jovanny Soto in 2009. His four opponents since the win over Soto had fought only 41 combined professional fights. His youth and inexperience will make for a tough hill to climb against a seasoned veteran like Narvaez.