Philadelphia boxing has a long history of great fighters and champions.  While the city has gone through some recent lulls in talent, resurgence is in the air.  Danny Garcia took home the WBC junior welterweight title last month.  Mike Jones and Teon Kennedy both have title shots June 9 on the Pacquiao-Bradley card.  Hank Lundy could be getting his title shot at any time.  Several others are in the mix, including recent TV winners Bryant Jennings, Gabriel Rosado, and Ronald Cruz. 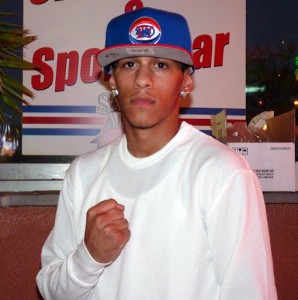 Coming out of North Philadelphia’s Rumblers Boxing Club is a fighter that could be leading the next wave of Philly contenders.  Bantamweight Miguel Cartagena only has four pro fights under his belt, but had a buzz as a future contender long before turning pro.  Cartagena 4-0 (3 KO) was turning heads at sixteen years old as a top amateur talent.

Cartagena got into boxing for simple reasons and quickly took to the sport.

“My father started me off twelve and a half years ago.  I needed a hobby.  Just always stuck in the house.  Needed a hobby.”

Cartagena stated that being ranked number one in his weight class in the amateurs was his proudest accomplishment along with the long list of accolades he earned as an amateur.

Despite his success in the amateur ranks, Cartagena was anxious to step into the pros.  He had some thoughts of sticking around for the upcoming Olympics but instead chose not to wait around and entered the pro ranks at eighteen years of age a little over one year ago.

“I had a way better pro style than amateur style.  Not a big fan of the amateurs.  I only did it because I was under the age to turn pro.  As soon as I was able to turn pro, I turned pro.  It was always a dream of mine.”

Cartagena had a decent match in his first fight, taking on a more experienced foe that had a losing record, but had several pro fights under his belt.  His opponent presented a twist he was unaccustomed to.  Still, he used his superior skill and walked away with a wide unanimous decision.

“I didn’t notice at first he was a southpaw.  He was already a veteran.  He already had eight fights and this was my pro debut.  It was a good test for me straight out the gate.  I had a good mindset going into the fight.  I kept working my jab and didn’t want to get hit with anything big.  Kept my distance from the guy and kept the pressure on him.”

But since that first fight, Cartagena has faced lesser competition that he has quickly blown out of the ring with his mix of speed, power, and talent.  Cartagena is frank about his competition while being clear that he must always be prepared for anyone that steps into the ring.  He admits that he would like to be tested at a level closer to his abilities.

“Last couple fights I wasn’t really too happy.  I was fighting guys I’m way better than.  I think that bum or not, I didn’t say it, I keep my hands up at all times and do what I got to do.  Any fighter, at the end of the day, he knows how to fight so.

“For all my fights I would look for better competition, something more exciting, something different.”

Cartagena can often be found with a big smile on his face and he brings a personality that will draw fans.  His style in the ring should also make him a fan favorite.  He is exceptionally quick and attacks his opponents in a fan friendly style.

Entering the ring and inside the ring he is often displaying his natural state of enjoying life and having a good time.  Cartagena explained that his demeanor is not an act but simply who he is and that comes out on fight night.

This Friday night Cartagena will engage in his fifth pro fight.  He will take on Jose Rivera 3-5-2 as the co-headliner at the National Guard Armory in North East Philadelphia.  Cartagena, like many fighters, does not invest time checking out his opponents and leaves that to others.

“I don’t really pay much attention to the guys I’m fighting.  I just do what my trainer tells me to do, stay focused on the fight.”

Rivera has gone the distance against three undefeated prospects in his last three outings.  Rivera is an improvement over the last few opponents, but Cartagena should not have much trouble considering his skill level.

The fact that he can co-headline a show in only his fifth pro-fight speaks to the interest he has already drawn and the future potential.  Fans want to see him fight and they want to see if the hype is real.

No prospect is a sure thing, but Cartagena appears to have the goods.  He certainly has the confidence to go to greater heights and a clear understanding of what is needed to reach the top of the sport.  He stated his goals for the sport and then echoed the now famous Floyd Mayweather 24/7 line when talking about what it will take to be a champion.

“Hard work and dedication.  I have to work a lot to get through the door, but at the end of it, it’s going to be worth it.”