Erislandy Lara (15-1-1, 10 KOs), who has depending on your perspective either not won a fight since last January or is still undefeated, takes on Ronald Hearns (26-2, 20 KOs) this Friday in Biloxi, Mississippi. In a year that seems to be polluted by more bad decisions than usual, it is perhaps instructive to note Lara’s role in proving the validity of the phrase “Karma’s a bitch” last year. 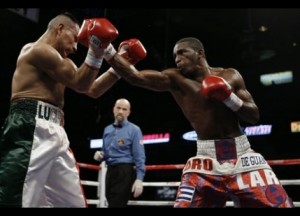 We all know the narrative. Lara, who was relentlessly pimped out to us in the greatest marketing blitz for Cubans since the Miami Sound Machine’s heyday thanks to ESPN2, ran face-first into Carlos Molina on FNF last March. Ten rounds of script-flipping later, Molina had a majority draw and his career was off to the races. Trouble was, that fight was a blatant, vile robbery—Molina clearly won that fight.  Judge Richard Houck, who had it 97-93 for Molina, probably nailed it spot on. Your columnist had it 96-94…and probably favored Lara too much in the early going.

The boxing gods have long memories. This is the only explanation that makes even a modicum of sense and wasn’t written by Mario Puzo or Mickey Spillane when it comes to Lara’s next fight against Paul Williams. That decision was so bad that the New Jersey commission had the Kabuki theater machine fired up in order to suspend judges Donald Givens (who has not judged a bout since, so maybe there’s something to the commission after all), Hilton Whitaker III (ditto), and Al Bennett (d to the itto, yo.)

Lara has not fought since; this will be his first contest after the nine-month layoff. Williams stepped into the ring against feather-fisted James Kirkland conqueror Nobuhiro Ishida and beat him silly for twelve rounds en route to a no-controversy-here 120-108×3 unanimous decision. The boxing gods were thorough; Williams isn’t winning any titles anytime soon (even a mid-level junior middle like Cornelius Bundrage or Vanes Martirosyan would probably stomp him the way Williams has been fighting these past couple years), and it remains to be seen whether karma is done paying back Erislandy Lara.

For a moment of digression, let’s step back to the judges mentioned two paragraphs back. Donald Givens, Hilton Whitaker, and Al Bennett are all inactive. None of them have been invited to sit ringside with a scorecard in front of them since last July 9th. When the New Jersey commission said that those judges would be suspended and ordered to undergo further training, not a soul in the world took the commission seriously in the slightest. If I asked you if you thought, without looking, that those guys were still sidelined, you’d surely have said “Yeah, right, check the fight registers from New York or Connecticut or Philadelphia. They might be on the outs in Jersey but if Gale Van Hoy and Pierre Benoist still have jobs…”

Well, guess what. Sometimes the system at least maintains the illusion of working. One of our journalistic imperatives here at the Tribune is to call out corruption, incompetence, and everything else that is killing the sport of boxing, and we do it better than anyone thanks to our independence from the grifters, whores, and pimps that make up the sport’s power brokers. Whatever the reason, three judges so completely and blatantly crossed the line that even boxing people couldn’t defend them. Hats off to the New Jersey commission. Nobody’s imputing pure motives to those guys, but in much the same way as “at least the right guy won” is so often the reaction to a judgment, the Garden State did something right and nearby states followed along. Kudos.

What does this mean for Erislandy Lara? Well, it may just mean that his karmic debt is paid, his sentence served, and oh by the way, his one loss on his record not taken seriously by anyone who knows anything whatsoever about the sport. He may as well be undefeated (realistically, he’s 16-1 if you count the Molina fight, but…) Here’s hoping we don’t have to open a new karmic account for him when the weak commission in Mississippi allows him to steal one from Ronald Hearns. It may not matter; Hearns has been knocked out twice, has a chin you could use to make church windows, and has been inactive for over a year since Felix Sturm beat him like a redheaded stepchild last February.

Fox Doucette covers Friday Night Fights for The Boxing Tribune. His weekly column, The Southpaw, appears on Thursdays. Fan mail, hate mail, and DVDs of “Jersey Girl” can be sent to beatcap@gmail.com.