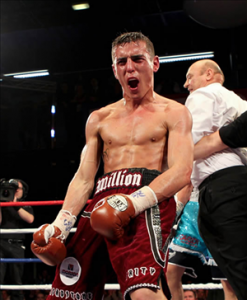 Crolla spearheads a sparkling group of British lightweights and will see Matthews, 29-6, 15 KO’s as the last stepping stone before he moves into world class. At 29 years of age Matthews is an experienced operator, but has usually come unstuck when he’s mixed in decent company, and was soundly beaten in seven rounds last time out by Italian Emiliano Marsili.

Crolla, 23-2, 9 KO’s, needs a couple more defences to earn the much-sought after Lonsdale Belt outright, and Matthews will only offer token resistance.

Askin has been drawing huge plaudits as he’s settled into his professional career, and will be favourite to turn back Dickinson, who has recovered well from a couple of setbacks in 2009, when he was stopped twice in succession. Both stoppages, however, were the result of freak injuries, and Dickinson could provide stern opposition for the irrepressible Askin. The fight promises to be a barnstormer whatever the outcome.