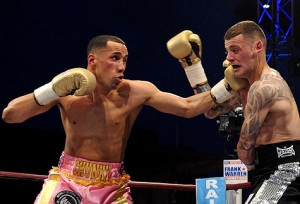 From the very beginning it became obvious that the UK’s DeGale was superior to Sanavia in just about every way. The Italian would march forward and make the effort to press his opponent, but he lacked the speed to catch the mobile DeGale and lacked the power to make a difference in the narrative of the bout.

Instead, Sanavia took quick shots, upstairs and downstairs, from the Brit, easily losing the first three rounds on the scorecards.

The fourth round seemed to be simply more of the same, but Sanavia would oddly double over and fall to the canvas up close to Degale and without a punch having landed. He would get up, only to be dropped three more times, this time with DeGale actually landing punches, before the fight was stopped.

On the undercard, Copenhagen’s Patrick Nielsen (14-0, 8 KOs) stopped Argentina’s Gaston Alejandro Vega (17-5, 6 KOs) in the tenth round of a scheduled twelve round middleweight contest.

Sloppy and amateurish early on, the 21-year-old Nielsen, who owns a minor WBA title, eventually settled into a rhythm against an increasingly tired Vega.

By the sixth round, the Argentine import, who fought sloppily throughout, was showing real signs of fatigue. In the seventh, Vega was dropped by a marginal shot from Nielsen, but managed to beat the count.

In the ninth, a right-left combination sent a tired and dangerously sloppy Vega back to the canvas. Vega would beat the count once again and would even manage to drop a careless, hard-charging Nielsen seconds later while in full retreat.

Nielsen brushed off the flash knockdown and ended the show in the next round, dropping Vega hard and making a referee count unnecessary.