One of the final images of the first fight between Bernard Hopkins and Chad Dawson was Dawson yelling across the ring at Hopkins.  Dawson was making accusations that Hopkins was faking the shoulder injury to get out of the fight.  Dawson was angry, believing Hopkins had pulled a fast one, therefore robbing him of getting a huge win in decisive style over the aging legend. 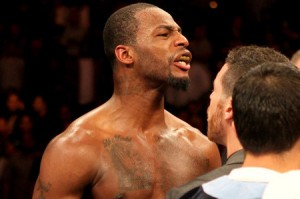 Now, six months later, not much has changed.  As Chad Dawson prepares for his rematch this Saturday with Bernard Hopkins at Boardwalk Hall in Atlantic City, he still believes Hopkins faked the shoulder injury in the last fight and is still angry at the result.  Dawson feels Hopkins’ act of getting out of the first fight was a confidence booster for him going into this fight.

“On my behalf, the way the last fight ended, I could only take it as a confidence builder.  I don’t believe Bernard Hopkins was hurt.  He showed he really didn’t want to be in the ring with me that night so it’s a confidence booster for me.  I want to go in there and pick up where we left off.  I want to be the aggressor.  I want to make him fight and give the fans what they came to see last time, a real fight.

“He said he dislocated his shoulder but we didn’t see any doctors or things like that so my confidence is through the roof right now.”

“I’m just going to say I never thought Hopkins was hurt.  I still don’t believe Hopkins was ever hurt.  We never heard anything about his rehabbing or anything else.  My only fear is that Hopkins would not go through with the entire fight.  Somewhere during this fight, if he’s getting a beating from Chad will find a way to get out of the fight.”

Dawson is known for being a cerebral boxer.  He is seen as someone who is content out-boxing his opponent to a points win, but he believes he was the aggressor against Hopkins and will have plenty more this time around.  Dawson is stating he will be on the attack to force Hopkins into a fan friendly fight.

“Hopefully this time we can give the fans what they want to see, a real fight.

“I think the last fight I deserve credit for being the aggressor and being the one to try and bring the fight.  I was the aggressor, I was pressing the fight, I tried to get Bernard to fight, but he didn’t show any signs he wanted to fight until the fight was over.”

Dawson did at one point show a respect for his opponent’s accomplishments.

“Like I tell everybody I admire everything he’s done in the sport of boxing over the last few years.  To become the oldest world champion.  Those are things you can’t take away from Bernard Hopkins.  The only thing I can do is go out there and dethrone him.  I want to be the world champion.  I want the same recognition that Bernard gets.”

Then it was back to making his points.  Dawson says Hopkins was up to his tricks he is so well known for in the ring during the two rounds of their first go round.  Dawson says he expected Hopkins to fight dirty.

“I think he did everything we thought he would.  He started head-butting early, all his dirty tactics.  He kept jumping on my back.  Everything he did that night we expected.  Even when he hit the canvas we knew he wasn’t getting back up.  Gonna fake it till he made it.”

Dawson is fully convinced that Hopkins did not want to be in that fight, on that night.

“I’m going to keep saying it.  Bernard did not want to be in the ring with me that night.  Maybe he undertrained.  Maybe he needed more time to get in better shape.  I don’t know.  I’m here and I’m for real and I’m coming to fight.”

Chad Dawon spoke bold words.  The question will be whether he can back them up.  Can a fighter known for being relaxed and passive in the ring fight with the fire he spoke with?  Can a young gun succeed against Hopkins where so many others have failed?  Dawson is not the first to talk about being the aggressor against Hopkins.  Others have tried, only to find it is easier said than done.

If Dawson comes through on his talk he will have a win that will take him to new heights and will have the name of an all-time great on his resume.  For his part, Dawson is looking to not only win, but make sure it is a complete victory that leaves no doubts about who is champion.

“That’s the goal, that’s my plan.  I want to beat him.  If it goes twelve rounds I want to win eleven or twelve of those rounds.  I’m looking to go out and beat Bernard in a great fashion that no one can say oh but this, oh but that.  I don’t even want a close fight.  I want to beat him decisive.”

During the media teleconference for the fight, Gary Shaw and Golden Boy CEO Richard Schaefer got into it over whether Hopkins wanted this rematch.   Shaw insinuated that Hopkins avoided them for three years and only fought the first time because they forced him into it to get the Pascal rematch.  Shaw stated if he had not argued to the WBC for the mandatory rematch this second go round never would have happened.

“They didn’t want the fight.  They lobbied against the fight.  I won on the floor of the WBC convention.  That’s why Hopkins is taking it, because without the belt Hopkins is just an old fighter.  So he needs that belt to be someone.

Schaeffer laughed at this notion believing Bernard Hopkins at this point in his career is not going to take a fight because he wants the WBC belt.  Schaeffer believes that Hopkins name and legacy allow him to do what he wants and what he wanted was to fight Dawson again.

“This is ridiculous.  I was recently at Bernard’s house.  Bernard has more belts than other people have to hold up their pants.  So the fact is that Bernard at this point, forty seven, forty eight years old, he doesn’t need no belts you know.  He could have gone and fight Shumenov for the WBA belt.  He could have gone and fight Cleverly.  A huge showdown in the UK with huge crowds.  There were so many other options but this is what Bernard Hopkins is.  This is exactly again shows the kind of fighter Bernard Hopkins is.  Never turns down a challenge and everybody felt that he was going to not fight him again and guess what, he always does the unexpected.  Even surprises Gary Shaw and Chad Dawson that the result of Bernard taking the fight is because of some silly ruling from the WBC.  He is mistaken, he knows that.”