Carson Jones (33-8-2, 23 KOs) will defend his minor welterweight title against Allen Conyers (12-6, 9 KOs) in a 12-round fight headlining a card at the Crowne Plaza Hotel in Tulsa, Oklahoma on Thursday night. 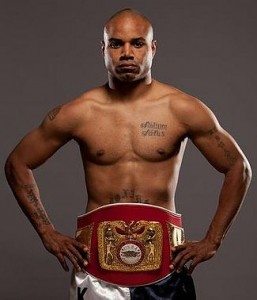 Jones, the 25-year-old journeyman from Oklahoma City, is making his first appearance of 2012 after a busy 2011 that included five appearances. Four of Jones’ eight losses came early in his career to the ilk of Alfonso Gomez, Roberto Garcia, Freddy Hernandez, and Jesus Soto Karass. He suffered another loss in September of 2010, but has won seven straight against club-level opposition. Labeled an “opponent”, Jones stopped undefeated Tyron Brunson in 2009.

Conyers is a perennial “opponent” and journeyman, having faced and lost to Delvin Rodriguez, James Kirkland, Carlos Molina, and Ronald Cruz. The highlight of Conyers’ career came in 2011 when he upset undefeated prospect, James De La Rosa, dropping him three times en route to a 10-round unanimous decision.