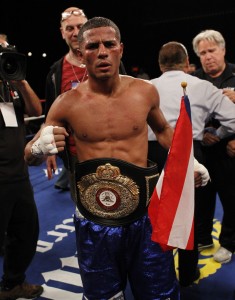 Martin will have a big edge in experience over Del Valle. Having already beaten prospects Eduardo Arcos, Chris Avalos, and Charles Huerta, Martin has been extensively tested at this level. In his last fight, Martin battled to a disputed majority draw with Teon Kennedy in the opening Friday Night Fights of 2012.