At the Echo Arena, Liverpool on Friday night local boy and Scouse poster-boy Tony Bellew squares up for the first time since surrendering his unbeaten record to Nathan Cleverly last November. 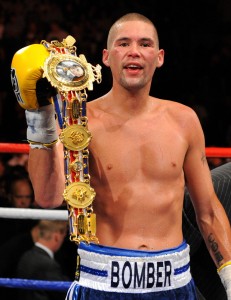 Bellew, who talks as well as he fights, has seen fit to revise his version of events in that fight, when he failed to usurp Cleverly’s WBO 175 pound title, now claiming that he was the victim of a bum decision, when in his first response to the television cameras post-fight he had candidly admitted that he’d fallen short, and that Nathan was a worthy winner.

Bellew, of course, is trying to goad Cleverly into a re-run.

Bellew, 16-1, 10 KO’s. pitches up against former European champion Danny McIntosh, 13-2, 7 KO’s, and they’ll be contesting the vacant British light-heavyweight title over twelve rounds. It’s a must win fight for Bellew, who performed creditably against Cleverly, boxing beyond most pundits expectations and pushing the precocious Welshman close. The Liverpudlian has shown in the past a tendency to rely too heavily on his undoubted punching power, and has come unstuck on a couple of occasions, notably in 2010 when he hung his chin out for celebrated puncher Ovill Mackenzie in the second round of their fight and got himself viciously knocked down. Bellew will point to the fact that he got to his feet and went on to win the fight, and I’ve seldom seen a fighter so heavily knocked off his feet and continue in a fight.

Resilience alone, however, will not see Bellew realise his ambitions. Neither will his unshakeable belief in his own ability, which he’ll need to temper with a little reality. McIntosh is a live opponent even if his European title was won in a huge upset when he overcame a wide points deficit to stop home fighter Thierry Karl of France in the eleventh round in in January last year.

Until that win it appeared that McIntosh had found his level as a competent British performer, and it may be that he’ll settle at that level. He surrendered the European title in his first defence a year ago, when he was stopped in seven rounds by German Eduard Gutknecht. A clearer view of McIntosh’s international credentials can probably be formed by reviewing his own outing with Cleverly in 2009, when he was soundly beaten, again in seven rounds.

So, on paper, this should be Tony Bellew’s night. He’s expecting a quick and decisive victory: This fight could be fast and explosive. It could be over in the second or sixth rounds, but it will be early”, he said.

“This fight is going to lead onto big, big things when I beat Tony better than Cleverly did. That was a very close fight; this fight is not going to be so close.”

I suspect Danny’s right, but he’s picking the wrong winner. Bellew should get to him, sometime around the eighth or ninth round.