This weekend, Paulie Malignaggi (30-4-KO6) will give the sport of boxing a much needed shot in the arm when he displays his talents to legions of fans the world over. Giving us a rare glimpse in the mind of a legitimate boxing savant, Paulie intends on submitting a performance that will simultaneously shake up the industry and put the other welterweight champions on blast…

Unfortunately though, for magicians, the lines of reality and fantasy are often blurred and since this opening stanza is about the “Magic Man”, some illusion was necessary in order to provide perspective…The reality of his situation is much different, Malignaggi is traveling abroad in search of relevance at home – Barring a shocking, career-redefining performance in his upcoming bout with unbeaten (and largely unknown to audiences outside of Europe) Ukrainian, Vyacheslav Senchenko (32-0-KO21), there are other arenas of interest that Paulie Malignaggi’s unique talents would be better served. 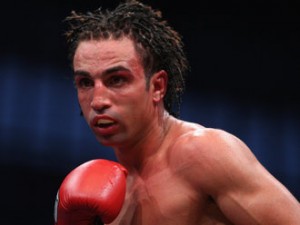 Unlike most boxers, Paulie’s biggest strength lies in his innate ability to rattle off volumes of mostly well thought out, highly opinionated aural gems. Well faster and often much more powerful than his lightly regarded fists, Paulie is in a very unique instance that he is able to capitalize off his natural vociferous qualities and retire from boxing without exploring the well-blazed trail of bankruptcy common among fighters. Better yet, he’s able to leave without acquiring slurred speech – the tell-tale sign of a boxer who has absorbed too much punishment through battle.

Once featured in an excellent documentary ahead of his June 2006 clash with then undefeated WBO Jr. welterweight champion del mundo, the pride of Caguas, Puerto Rico – Miguel Angel Cotto (a man whose current long introduction will rival his next challenger’s own lofty set of accolades). The “Magic Man” exhibited flashes of quickness in his jabbing technique, occasionally throwing small combinations; all of which were largely ineffective against the ever stoic Caguas Crusher. This has been the hallmark of Paulie’s entire career, though. Malignaggi has usually had a modicum of success via his fast hands and large amount of courage but it has never translated into enough to defeat fighters above the B-/C+ pay grade.

Let’s be honest and frank for a moment. The casual boxing fan either has no clue who Paul Malignaggi is or knows of him as the shit talking New Yorker with little to no power. If they saw his rematch with Lovemore N’dou they’d remember his ridiculous hair debacle and little else. Shape-shifting hairstyles aside, why should Paulie continue to risk his health for people who generally don’t want to see him inside of a boxing ring? Malignaggi always shows up to his fights in incredible form, he’s a top athlete no doubt; so why don’t fans watch his fights? In boxing there is a direct correlation between stopping power and entertainment (the Brits call it value for money), and Paulie is to power punching what NASCAR is to turning right.

Outside of obtaining a case of pugilistic dementia, there’s little left for Malignaggi to achieve inside of the squared circle. He has made some handsome paychecks from his notable losses, but as they say, you must think outside of the box to get inside the box.

Using his unique gift for remaining captivating throughout his often long-winded diatribes, dollars-to-pesos, Paulie would easily give a certain other Magic Man a run for his money (and cue card reading ability).

The boxer turned commentator role is one that is not new to the sport (See: Roy Jones Jr., ‘Big’ George Forman, Antonio ‘The Line’ Tarver etc.) and from a fan’s prospective it is always beneficial to have some genuine veteran insight during a boxing match. This would be an extremely intelligent avenue for Malignaggi to explore and to remove himself from the harsh world of prize fighting at the age of 31 can only be advantageous to the people that do care for him.

Speaking of fighters who should explore other employment opportunities:

In a fight that was set up for him to win big, Jermain Taylor narrowly escaped catastrophe at the hands of the relatively inexperienced Caleb Truax (having to pull himself off the deck to win on points). This isn’t the JT that fans want to remember. Someone needs to inform ‘Bad Intentions’ that surviving a knockdown from an obscure prospect does not a comeback make. Hang em’ up, champ.

If Librado Andrade has any hope of preserving some semblance of a brain he needs to give up professional boxing ASAP – He soon will only have the mental capacity to do hard labor or perhaps work his old job administering hamburger flips.

Roy Jones Jr., please retire…We love you, man. Remember the late 90’s? You were fucking awesome, now not so much.