The World Boxing Council (WBC) has elected to strip Andre Ward of his WBC super middleweight title and has sanctioned a bout between number one ranked Anthony Dirrell (24-0, 21 KOs) and number three ranked Nikola Sjekloca (24-0, 7 KOs) for the world title.

Ward, who injured his hand in the Showtime Super Six World Boxing Classic final in December, has still not announced his next move. The WBC claims the hand injury is the reason for their move, which they are calling “promoting to Champion in Recess”, yet Ward has stated his hand has healed. 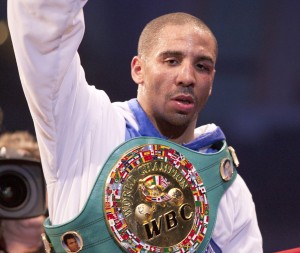 Andre Ward fought his way through the Super Six tournament to win two world titles and his place among the best in the sport, and the WBC was happy to include their title in the tournament. But as quick as they agreed to allow their title into a big-money tournament that could have (and did) last two years, they took it away from its rightful owner in favor of an immediate stimulus of cash.

This isn’t the first time the WBC has bent their own rules to remove a semi-inactive champion from his post before the period for a mandatory defense expires (see Timothy Bradley last July), in favor of promoting their internal agenda and an immediate pay day for the Mexico-based organization. And it certainly won’t be the last.

In other WBC news, Vanes Martirosyan is again being placed in the unfavorable position of being mandated to fight a “final eliminator” against a Golden Boy fighter – namely Erislandy Lara. Martirosyan is promoted by Top Rank, who is engaged in another cold war with their upstart rival, Golden Boy Promotions.

Martirosyan beat Saul Roman last June in what was supposed to be a “final eliminator”. After the victory Jose Sulaiman and the WBC changed their stance and claimed he fought in a “semi-final eliminator”, and he was ordered to fight James Kirkland for the right to challenge WBC jr. middleweight titlist, Saul “Canelo” Alvarez. Negotiations fell apart and Kirkland moved on to face Carlos Molina in a “semi-final eliminator” of his own. Kirkland was trailing on two judges’ scorecards at the time of the disqualification, but with a little help from trigger-happy Texas referee, Jon Schorle. Kirkland sustained a shoulder injury in the fight and is unavailable for the time being, so number three contender Erislandy Lara was named Martirosyan’s “final eliminator” opponent.

In the likely event Top Rank and Golden Boy can’t come to an agreement on a Martirosyan-Lara fight (and a purse bid is conveniently passed over), Lara will move on to a “semi-final” eliminator, continuing the cycle of keeping the mandatory challengers two steps behind Alvarez, who will have free reign at a seemingly endless list of voluntary defenses.

Julio Cesar Chavez Jr. takes a lot of criticism for the way he is protected by Top Rank (his American promoter of record) and the WBC (his unofficial promoter), but Alvarez receives the same treatment just one division south of the son of one of Mexico’s greatest pugilistic idols. While Chavez has locked in another optional defense against Andy Lee (his second in three fights), Alvarez is set to make his third straight optional defense against 40-year-old Shane Mosley in May.

Sergio Martinez has been forced to stand on one foot, juggle molotov cocktails, and jump through flaming hoops as sharks with laser beams on their heads circle below, to get a shot (that may never come) at Chavez Jr., and it appears Martirosyan is headed down the same path.