On June 9th, Filipino superstar Manny Pacquiao will return to Las Vegas, Nevada to take on the undefeated Timothy Bradley in a 12 round defense of his WBO welterweight championship of the world. Broadcasting live on HBO PPV, the televised portion of the undercard will begin at 9 p.m EST and 6 p.m. PT. 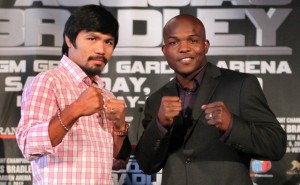 Featured on the undercard will be fan favorite Mexican WBO bantamweight champ, Jorge ‘Travieso’ Arce (60-6-2, 46 KOs) in a 10-round non-title jr. featherweight affair against Puerto Rican, Jesus Rojas (18-1-1, 13 KOs). In his last bout, also a non-title contest, Arce knocked out Venezuelan, Lorenzo Parra in the fifth round of a scheduled ten round bout.