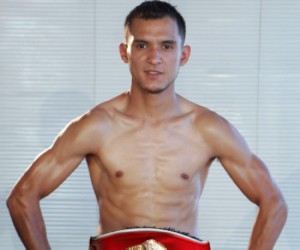 Sanchez, a southpaw, was just too big, too athletic, and too good for the honest, earnest, but fairly pedestrian Rosas.

The defending champ dropped his challenger in the first round with a straight left hand and caused an ugly cut on the bridge of his nose via right uppercut, straight left hand combo in the sixth. The rest of the fight was pretty similar, with Rosas pursuing, but Sanchez boxing effectively in retreat.

Palenque de la Feria, Celaya, Guanajuato, Mexico– Filipino, Denver Cuello (31-4-6, 21 KOs) came to Mexico and scored a second round knockout over Mexican, Ganigan Lopez (20-5, 14 KOs) in an eliminator for a shot at the WBC strawweight title.

Cuello is now in line for a title bout against WBC 105 lb. champ, Kazuto Ioka.

Caro would suffer one knockdown in the second round and two in the ninth before the ref waved off the contest.