Nobody will ever make a case for this being a golden age in the heavyweight division. That doesn’t mean, however, that the division is completely devoid of intrigue. 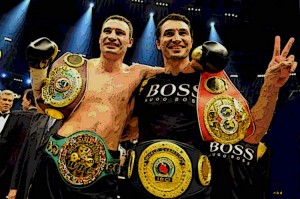 40-year-old WBC champ, Vitali Klitschko, may not fight beyond 2012 and the implications of that title vacancy are having challengers jockey for position.

Meanwhile, WBO/IBF/WBA champ, Wladimir Klitschko is still going strong and has, for the most part, cycled through all available challengers. Although the younger Klitschko brother will be relegated to fighting rehab projects for the foreseeable future, there are plenty of interesting fighters in line behind him. Maybe none have a legitimate chance of defeating him, but good bouts could be had among the second tier big men.

Names like Alexander Povetkin, Robert Helenius, Chris Arreola, Tyson Fury, Kubrat Pulev, and at least a half-dozen other names could be matched together for interesting bouts. Further down the line, Seth Mitchell, David Price, and Mike Perez could also become interesting figures in the division.

Here’s a look at the scheduled heavyweight action for the Summer of 2012 (Of course, this is boxing, and the schedule is definitely subject to last-minute change):

An exceptionally well-matched bout between two small heavyweights on the rebound. Both are one fight removed from one-sided losses to a Klitschko brother (Adamek suffered a TKO10 to Vitali and Chambers fell via KO12 to Wladimir) and both desperately need a win. Frankly, neither will ever have a legitimate chance to grab a real world title while the Klitschkos are around, but there’s plenty of money to be had in fighting off the main stage and/or for secondary titles.

2012 was a breakthrough year for Philadelphia’s Jennings, who beat undefeated Maurice Byarm in February when the NBC Sports Network’s main event of Eddie Chambers-Siarhei Liakhovich fell apart due to a last minute Chambers injury. In his next bout, he upset former WBO titlist, Liakhovich to take a RTD9 victory. Texas native, Collins, is a textbook club fighter, with most of his fights on the Houston club circuit and all but one contest taking place at the six or four round limit. Collins’ last four opponents, combined, sport an uninspiring 52-53-5 record. Scheduled as chief undercard support to Adamek-Chambers, Jennings should take this, look impressive, and still have room for one more solid fight before the end of the year.

The one-night, eight man heavyweight tournament, consisting of 3-round bouts, boasts an impressive list of entrants and, if the roster stays unchanged, the winner could emerge as a short-cut title contender.

As of the publication of this article, this is the tournament roster:

Arreola is still, arguably, the most entertaining and viable American heavyweight contender despite having a boatload of technical flaws and an up-and-down dedication to the gym. Crude, but willing Mike Mollo (20-3-1, 12 KOs) has been pegged to be Arreola’s opponent on the Victor Ortiz-Josesito Lopez undercard, but the Illinois native is just a few weeks removed from being denied medical clearance in Delaware for “issues” pertaining to his CAT scan results.

How carefully has Olympic bronze medalist, Wilder, been matched? 36 year-old journeyman, Beck, who is on a seven fight losing streak, is by far the best opponent on the 26-year-old’s resume.

Neither fighter is anything more than a journeyman at this point of their careers, but there’s something to be said for matching two down-on-their-luck fighters in a bout that could re-open doors to bigger things. The crude Grano always comes to fight, mainly because he can’t fight in any other way. “Touch of Sleep,” Williamson showed promise early in his career, but is now just a 43-year-old opponent with hopes of getting one more six or seven-figure payday. All in all, Grano-Williamson should be an interesting third-tier match-up. Also on the multi-fight Don King undercard, former world titlist, Samuel Peter (34-5, 27 KOs), riding a two-fight losing streak and The Ukraine’s Oleg Platov (29-1, 23 KOs) will be facing opponents to be announced.

What do you do if you’re a 37-year-old fringe contender who has failed on every occasion you’ve stepped up in class and you’re coming off a one-sided loss to a young prospect? If you’re Ibragimov, you go back to your native Uzbekistan against, likely, a Grade A tomato can.

The West gets flimsy toys, cheap calculators, and poorly-made gift shop souvenirs; The Far East gets two sloppy heavyweights slinging gloves at one another. This contest is for two WBO belts (The China Zone heavyweight strap and the Asia Pacific title) and could very well be a competitive match-up, if you don’t mind loose flesh and sweaty, beefy embraces. American born, New Zealand resident, Welliver is not bad for a journeyman competing in a shallow talent pool and Williams is not bad for a veteran American opponent. Together, they should provide about two minutes of solid action over the course of a twelve round bout.

Former 2004 U.S. Olympian, Estrada is moving further and further away from the main stage with each passing bout. The 31-year-old now finds himself firmly planted in the third-tier of heavyweight contenders after losing each time he has tried to move up in class. 38-year-old Puerto Rican, Gonzalez, is a club fighter, straight from central casting with a 2-5 record in his last seven to prove it.

Veteran, Barrett had one foot out the proverbial door after an embarrassing and ugly 0-3 streak in 2008-2009 (against David Haye, Odlanier Solis, and Alexander Ustinov), but a draw and a win over a faded David Tua has kept him in the game. Now, the 41-year-old takes on New Zealand’s “Mountain Warrior,” Cameron in a bout for two regional WBO titles. Cameron, 34, may be favored to beat Barrett, but with a supremely padded resume and two stoppage losses against the only noteworthy fighters on his career record (David Tua KO2, Friday Ahunanya TKO12), Barrett can’t be overlooked.

Former Russian amateur star, Abdusalamov, fights like a southpaw wrecking ball and is crude, but serious about every punch he throws. Working with Sergio Martinez’s trainer, Pablo Sarmiento, in Oxnard, California, the 31-year-old is looking to move along a little faster in his career and the tough Byarm is a half-step up from Abdusalamov’s last several opponents. Fellow southpaw, Byarm, is the more traditionally-skilled fighter in this contest, but nowhere near as physically powerful.

Their first bout in 2008 was a snoozer that ended with an eleventh round KO loss for Thompson. Since then, the 6′ 5″ American southpaw has tread water long enough to work his way back into the title picture with nondescript wins over fringe challengers and journeymen . At 41-years of age, there’s no reason to believe that Thompson will do better this time around. Plus, Klitschko is an all-around better, more confident  fighter than he was four years ago. An entertaining, competitive bout may be too much to wish for, but a more realistic wish may be for Klitschko to end this snoozer in five rounds this time, rather than eleven.

The 24-yearl-old prospect is becoming a heavyweight title challenger by process of elimination as every other viable big man gets removed from the pack by a Klitschko Brother. Still, the 6′ 9″ Brit is not totally undeserving of his Top 10 heavyweight placement. Wins over Dereck Chisora, Martin Rogan, and John McDermott make him, at the very least, a top European heavyweight. An opponent has yet to be named for his July 7 date, but don’t expect a world beater on such short notice.

Curious observers have been waiting the better part of six years for El Paso’s Rodriguez to step up his game. Now, fourteen years into his pro career, most have stopped caring and are assuming that the 34-year-old heavyweight is on the Butterbean career plan of lifetime tune-ups. California-based journeyman, Manuel Quezada is actually a step up from what Rodriguez usually faces and may present a bit of a challenge. But Quezada tends to fall apart in the presence of better-than-average fighters. The question is whether Rodriguez is better-than-average.

This non-sanctioned bout has drawn the ire of boxing fans around the globe and has prompted the British Boxing Board of Control (BBBofC) to threaten bans on all those involved in the outlaw bout. The brouhaha over two fighters with one total win over the last two years started with a nasty press conference brawl after Chisora lost to Vitali Klitschko last February. The sloppy brawl, involving broken glass and threats of drive-by shootings, resulted in both fighters having their licenses revoked by the BBBofC. Still, promoter Frank Warren moved ahead with plans to make the bout and market it as an unsanctioned special attraction licensed by the revenue-hungry Luxembourg Boxing Federation (LBF). Competitively, Haye-Chisora is actually a pretty nice bout and, likely, the best heavyweight contest of the Summer.

This one is rumored to be Vitali Klitschko’s last bout and that begs the question of why he would choose to go out with a win over the utterly unspectacular Syrian, Charr. This will be Klitschko’s ninth defense of his WBC title since returning from a four-year retirement in 2008 to take the strap from Samuel Peter. Charr stands little to no chance of ruining Vitali’s retirement party with only wins over fringe characters like Taras Bydenko, Danny Williams, and Sherman Williams to justify a fair shot at an upset.