A recent article in Forbes Magazine lists the Top 100 highest paid athletes in the world, and Floyd Mayweather and Manny Pacquiao sit comfortably at the number 1 and 2 spots. 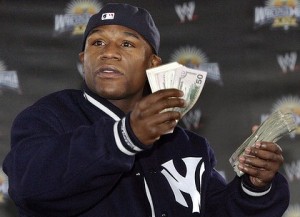 Between June 2011 and June 2012 Mayweather earned a reported $85 million in the ring. His September 2011 knockout victory over Victor Ortiz earned Mayweather a reported $40 million, and his May 5 unanimous decision victory over Miguel Cotto earned him $45 million. Manny Pacquiao, who last week was at the center of a controversy surrounding his split decision loss to Timothy Bradley, earned $56 million from his fights with the aforementioned Bradley and Juan Manuel Marquez last November. Pacquiao also brought in $6 million in endorsements, bringing his total earnings to $62 million.

Tiger Woods, the top earner of the last decade, slipped to the third spot behind Mayweather and Pacquiao with $59.4 million earned from his winnings on the golf course ($4.4 million) and endorsements ($55 million). Lebron James earned $53 million in a lockout-shortened NBA season, while Tennis superstar Roger Federer earned $52.7 million ($45 million in endorsements and $7.7 million in salary).