Hard-hitting, TV-friendly Russian fighter Ruslan Provodnikov (21-1, 14 KOs) makes his seventh appearance on ESPN2’s Friday Night Fights from the Omega Products International Arena in Corona, California, Friday night. He takes on Jose Reynoso (16-3-1, 3 KOs) in what should be more of a showcase fight than a genuine challenge. In the co-feature, Christopher Martin (23-2-3, 6 KOs), best known to FNF fans as the guy who fought Teon Kennedy to a boring-as-hell draw in January, battles Roberto Castaneda (20-1-1, 15 KOs) in what is either going to be a case of Castaneda adding another scalp or viewers sleeping through the main event if they don’t set an alarm to wake them up after the first attraction is over. 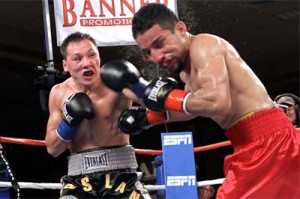 Provodnikov is a prototypical Micky Ward/Pawel Wolak-type fighter, only without the boxing skill of either of those two men. Provodnikov is best known as a guy who, rather than jab his way inside, prefers to simply bull rush through whatever is thrown at him in order to start working his opponent’s body. He throws a high volume of punches any time his opponent is unable to tie him up, which tends to lead either to a knockout or at least to a fight that gave fans their money’s worth en route to the decision. There is no fancy strategy inherent in the Russian’s style—he just goes in, kill or be killed. Considering his lone loss was an absolute travesty of a robbery decision against Mauricio Herrera (the same Mauricio Herrera who nearly finagled a thoroughly undeserved fight with Brandon Rios), Provodnikov could easily be walking into Friday’s action undefeated.

Jose Reynoso has all the makings of a designated fall guy here. He has three knockouts as a professional, including one in his last fight against a 6-9-1 fighter (James Hope) who had to retire after vomiting on his stool after the seventh round (and if you want to make the poop joke there, go right ahead). Either Hope had some kind of actual stomach virus or else his constitution was completely ill-suited to the task of professional boxing. Either way, this was not exactly Buster Douglas knocking out Mike Tyson.

Reynoso also holds the interesting distinction of having been knocked out in both of the only two contests he fought in his native Mexico. Normally a fighter can build a record on the Mexican club circuit then come stateside to get his beatdown; Reynoso chose the opposite approach to take his two stoppage defeats after a tetrad of four-round decision victories in California and Washington state. Since those stoppage losses Reynoso is 12-1 with all three of his KO wins; this may be a sign of things to come, or it may be (and more likely is) that Reynoso is Ivan Popoca 2.0, Popoca being the puffed-up record Provodnikov starched in eight rounds on ESPN2 last April.

Ruslan Provodnikov runs the risk of settling into a ceiling of “ESPN house fighter” with fights like these; if he is able to dispose of Reynoso in short order, it will be very interesting to see where and on what TV outlet the Russian fights next. Sometimes FNF launches careers; other times it launches glorified club fighters like Ray Oliveira and Emanuel Augustus to a comfortable if not glorious regular paycheck.

Meanwhile, the sideshow attraction provides us with another chance to see someone fans probably weren’t exactly clamoring with picket signs to see; Christopher Martin showed no particular skill, flair, or taste for action in that dreadful snoozer against Teon Kennedy. He is in against a guy who hits a lot harder than Kennedy did, a guy in Roberto Castaneda who is very keen to show that Martin’s chin need only attempt to stand up to a real beating and it will crack either figuratively or, perhaps in light of Victor Ortiz’s recent failure against FNF alumnus Josesito Lopez, literally. Martin is winless in his last three fights; including the draw against Kennedy on television, he has decision losses against Jose Angel Beranza (33-21-2 coming into their fight) and Luis Orlando Del Valle (15-0 at the time of their battle two months ago.)

Martin’s lack of power should not scare the once-stopped Castaneda; Castaneda’s lone loss was against a guy, Felipe Orucuta, who has now stopped 19 of his 23 victims in his 24-fight pro career. As to Roberto Castaneda’s own power, he has never fought anyone who could be reasonably said to be even a B-minus level fighter except for Orucuta, who knocked him out in five rounds. Martin is the better boxer who has fought the better level of opposition, which means Castaneda is going to have to use Martin’s lack of power against him, press the action, and force a stoppage lest Martin get to fight the battle on his own, terribly fan-unfriendly terms. This co-feature will likely be a snoozer, the only question is whether it will end with a bang (Castaneda knocking out Martin with one big shot) or a whimper (Martin cruising to an easy unanimous decision.)

Friday Night Fights airs June 29th on ESPN2 at 10:30 PM Eastern/7:30 Pacific time, following the conclusion of the NASCAR Nationwide series race, which if it runs long will delay the proceedings further (and given ESPN’s track record this year, this is a distinct possibility.) Whenever the start time, the Boxing Tribune will be here with a full recap of all the night’s televised action, including any swing fights that make air, following the conclusion of the telecast. Stay tuned; we’re the worldwide leader in covering the Worldwide Leader.

Fox Doucette covers Friday Night Fights for The Boxing Tribune. His weekly column, The Southpaw, appears on Thursdays. Fan mail, hate mail, and a good recipe for making Mexican food out of canned tomatoes in honor of Jose Reynoso can be sent to beatcap@gmail.com.