There were only three ranked fighters in action last week (Cornelius Bundrage, Erislandy Lara, Marco Antonio Rubio) and only one managed to move up within their division.

Cornelius Bundrage, with his TKO7 victory over Cory Spinks, moves up from #10 to #8, moving past an inactive Alfredo Angulo and Erislandy Lara, who was also victorious on Saturday. 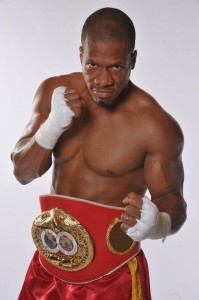 Lara, despite a win, actually moved down one slot to the #10 spot to accommodate Bundrage’s move. The fall became possible because Lara’s unanimous decision victory over Freddy Hernandez was actually above the 154 lb. limit, thereby not making it applicable to Lara’s overall score.

Marco Antonio Rubio stopped Jorge Cota on Saturday, but didn’t get enough of a boost to move out of the #10 slot at middleweight.

John Molina makes his debut in the #10 slot at lightweight due to Robert Guerrero being officially dropped from the rankings in advance of his move up to welterweight.