On Saturday nights’ HBO: Boxing After Dark series, live from the Home Depot Center in Carson, California, the fighting pride of Youngstown, Ohio will again try to convince his fans and handlers that he is ready to move back to the proverbial main stage of the sport. Kelly “The Ghost” Pavlik (39-2, 34KOs) will accept the challenge of the Queens born, New York club fighter, Will “Power”Rosinsky (16-1, 9KOs) in a further attempt to salvage his wayward career. 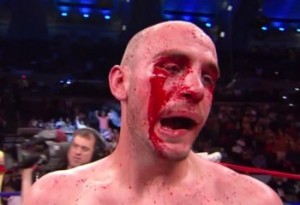 Kelly Pavlik has had some notoriously well-documented struggles outside of the ring and his problems with alcohol have led him to not only rehab his personal habits, but perhaps his dedication inside of the squared circle as well.

With four Golden Gloves championships under his belt, Will Rosinsky isn’t the usual push-over challenger associated with a ‘stay busy’ fight like this, so it will be up to the one-time unified middleweight world champion to look impressive on Saturday; anything less will be chalked up by fans and critics as just another sub-par accomplishment from the man who once wore the lineal middleweight championship crown.

Looking to revamp and potentially save his one-time stellar career from obscurity, Pavlik is now attempting to mend his relationships with both promoter, Top Rank, and the executives over at big T.V. (Kelly burned Showtime at the 11th hour in 2011 by bailing out of a scheduled fight with Darryl Cunningham over monetary squabbles) by supplying a steady line of victories over modest opposition. Saturdays’ fight on HBO marks Kelly’s return to premium cable.

It seems that Pavlik’s main focus now is to earn another main-stage marquee fight, perhaps along the way even scoring another highlight reel knockout to add to his ridiculously high knockout percentile (82.93%!). In fact, the only blights on The Ghost’s near perfect record have come at the hands of two men who undoubtedly will be remembered long after they’ve hung up their gloves.

After battling his way into contention with a series of impressive victories, Kelly secured a fight with the then unified, lineal middleweight champion, Jermain “Bad Intentions” Taylor. Pavlik would claim the WBC and the WBO middleweight titles in an upset TKO victory that night and would go on to defend his championship status, this time by unanimous decision, four months later in their contracted rematch.

The Youngstown native would parlay that success into a dream fight with Bernard “The Executioner” Hopkins (a man who one time dominated the middleweight scene) but was unable to show the old master any new tricks as he was routinely beaten to the punch and generally out-classed all night en-route to his first career defeat.

The loss to Hopkins appeared to have a strong emotional effect on Kelly and perhaps was a detrimental factor in his alcoholism spiraling out of control. Pavlik would, however, retain his two championship belts (the match was held at a catchweight of 170 pounds so no title was at stake) and continued to defend them at the middleweight limit in 2009 with a pair of solid victories in his hometown of Ohio.

In April of 2010, a date it seemed that Pavllik’s whole life was building up to, Kelly took on the challenge of the Argentinian junior middleweight, Sergio “Maravilla” Martinez at the Boardwalk Hall in Atlantic City, New Jersey. Fresh off a disputed loss to Paul Williams and equally disconcerting draw with Kermit Cintron, Martinez would be only a slight underdog going in based largely off his perceived hand-speed advantage when compared with Pavlik’s obvious blessings in size and power.

Sergio Martinez proved to be quite effective with his unorthodox, southpaw stance, landing stinging shots to the face of Pavlik and troubling the defending world champion early and often with his quick flurries and unbelievable lateral movement. By the mid-rounds, however, a shift of momentum would take place as Kelly seemingly adjusted to the speed of the challenger and his heavy hands would start to occasionally catch and frustrate the defense-minded Martinez, even sending him down in the 7th frame.

In the later rounds of their rapidly escalating war, Martinez would shift into a new gear which Pavlik would be unable to respond to. Maravilla would come off his stool in the 9th round of a very close, competitive fight, switching his ‘one and done’ style of pot-shotting the larger Pavlik to throwing brutal four and five punch combinations to the increasingly bloody face of the champion. This change was enough to discourage Kelly from putting any further meaningful work in for the remainder of the bout and cost him his championship belts and subsequently ended his reign at middleweight.

Kelly Pavlik, now training in Oxnard, California, returns to action on Saturday night after rifling off three consecutive victories since his last defeat. The hope for him is to land a lucrative fight with one of the major players at 160 or 168. There are, in fact, a host of intriguing match-ups to be had at the weight including a stylistically promising battle with IBF champ Carl “The Cobra” Froch. After turning down a potential clash with the once stellar Lucian Bute a few years back (again, over money), Kelly now fights to define his legacy and return to prominence in the middleweight division. Either that or to cash out with one last major pay-day.