Home Depot Center, Carson, California– It wasn’t easy, but the judges’ one-sided scorecards would give that impression as Nonito Donaire (29-1, 18 KOs) took a unanimous decision over Jeffrey Mathebula (26-4-2, 14 KOs) Saturday night on HBO’s Boxing After Dark. 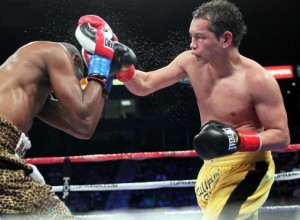 Billed as a champion vs. champion showdown between WBO 122 lb. champ, Donaire, and IBF 122 lb. titlist, Mathebula, the reality of the twelve-round championship bout painted it as a slumming superstar-in-the-making against a solid, but unspectacular paper champion.

As some wondered aloud about whether Donaire would ever be put in the ring against the division’s true top stars, HBO’s Max Kellerman gave fans the hard sell on TV, making Mathebula out to be a genuine and proper challenge to a fighter ranked in his own pound-for-pound top three.

As the fight actually progressed, the hyperbole passed and both fighters fell into their respective roles.

The bout, itself, was interesting enough as Donaire pressed the action and the nearly 6 ft. tall Mathebula pumped out copious amounts of meaningless shots, mixed in with an occasional face-rattler. But the South African never fought with enough urgency to really take many rounds and the tap-tap-tap of his punches wasn’t going to win him favor over Donaire, who was landing fewer punches, but throwing them like he meant to knockout Mathebula, his trainer, and the guy waving the South African flag.

At the very end of the fourth round, Mathebula was dropped and hurt by a wicked left hand, but the knockdown led to some of the IBF champ’s best work. From the fifth round on, he actually picked up the pace and began taking control of increasingly large portions of the fight until a Donaire shot fractured his tooth in the eleventh and stopped him from fighting back at all in the final two rounds.

With the win, Donaire unifies the WBO and IBF junior featherweight titles.

On the televised undercard, Kelly Pavlik (40-2, 34 KOs) had to work for his ten round unanimous decision victory over the game Will Rosinsky (16-2, 9 KOs) in a ten round  a super middleweight contest.

Rosinsky came out quick, taking the fight to Pavlik and earning the nod in the first round before a short, chopping right hand from Pavlik in the second sent the eager Rosinsky to the canvas.

No real damage was done from the flash knockdown, but it did affirm Pavlik’s place as the favorite and it created some space from which Pavlik could work.

Rosinsky never stopped trying and definitely had his moments of success, but Pavlik’s punches had more substance and, overall, his effort was more complete.